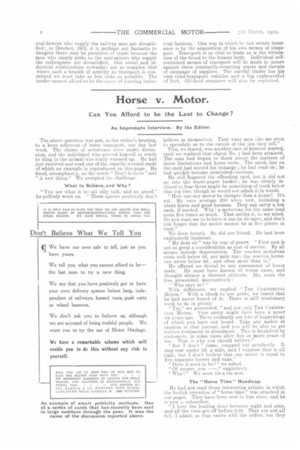 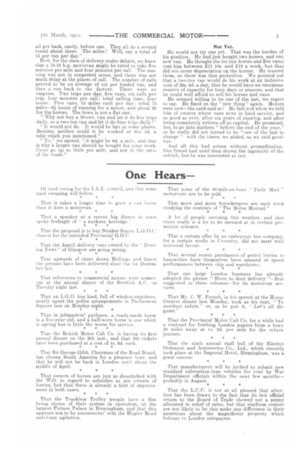 Page 2, 7th March 1912 — Horse v. Motor.
Close
Noticed an error?
If you've noticed an error in this article please click here to report it so we can fix it.

Can You Afford to be the Last to Change ?

An Impromptu Interview. By the Editor.

The above question was put, in the writer's hearing, to a keen adherent of horse transport, one day last week. The claims of motorvans were under discussion, and the individual who proved himself so ready to cling to the animal was really warmed up. He had ,just received and read one of the smartly-worded cards ,of which an example is reproduced on this page. He :fixed, triumphantly, on the words " Don't. b:lieve "and

A new thing." We accepted his challenge.

What to Believe, and Why ?

"You see what it is—all silly talk, and no proof," he politely went on. " These agents positively don't An example of smart publicity methods. One of a series of cards that has recently been sent in large numbers through the post. It was the cause of the discussion reported above. lelievc in themselves. They want men like me even to speculate as to the extent of the lies they tell."

This, we feared, was another case of humour wasted, until we realized that object No. 1 had been attained. The man had begun to think about the matters of horse limitations and horse costs. The catch line on the card had stirred his lethargy ; he had read on ; he had quickly become interested—curious.

He still fingered the offending card, but it did not go into the waste-paper basket ; he was clearly inclined to fear there might be something of truth below that top line, though he would not admit it in words. "How can any motor be cheaper than a horse ? It's rot. My vans average 280 when new, including a stout horse and good harness. They can carry a ton each, if needed. Why! a motorvan for the same load costs five times as much. That settles it, to my mind. Do you want me to believe it can be chz-aper, and don't you forget that the motor cannot be in five places at once."

We drew breath. So did our friend. He had been explosively insistent. "My dear sir" was by way of pause. " First cost is not so great a consideration as cost of service. By all means include depreciation. The one-ton motorvan costs well below od. per mile run: the one-ton horsevan never below 6d., and often more than is."

He offered no denial to our assessment of horse costs. He must have known of worse eases, and thought silence a discreet attitude. He, none the less, proceeded, destructively : " Who says so? "

With diffidence, we replied -" THE COMMERCIAL MOTOR." With a shock to our pride, we learnt that he had never heard of it. There is still missionary work to do in plenty.

"Yes," we proceeded, "and not only THE COMMERCIAL MOTOR. Your query might have been a poser six years ago. There evidently are lots of happenings of which you have not heard. Take any maker at random in that journal, and you will be able to get written testimony in abundance. This is furnished by customers, in some cases after five or more years of use. That is why you should believe."

" But I don't " came, snapped out petulantly. It may cost under 5d. a mile, and I suppose that is all right, but I don't believe that one motor is equal to five separate horses and vans."

He had not read Chose interesting articles in which the foolish retention of " horse time" was attacked in our pages. They have been sent to him since, and he is now a subscriber.

"1 have the loading done between eight and nine, and all the vans get off before 9.30. They are not all full, I admit, as that varies with the orders, but they

all get back, easily, before one. They all do a second round about three. The miles? Well, say a total of 15 per van per day,"

Now, for the class of delivery under debate, we knew that a 15-18 h.p. motorvan might be rated to take five minutes per mile and four minutes per call. The running was not in congested areas, and there was not much delay at the places of call. The number of calls proved to be an average of six per loaded van, and then a run back to the factory. There were no empties. Two trips per day, five vans, six calls per trip, four minutes per call: total calling time, four hours. Five vans, 15 miles each per day: total 75 miles-6.4 hours of running for a motor, and about 20 for the horses. The town is not a flat one.

" No," we agreed, " it might be 6d a mile, and that is why a larger van should be bought. for your work. Costs go up so little per mile, and not. in the ratio of the loads."

He would not try one yet. That was the burden of his position. He had just bought two horses, and one new van. He thought the lot (six horses and five vans) cost him between ill 108. and .212 a week, but that did not cover depreciation on the horses. He insured them, so there was that protection. We pointed out that a two-ton van would do his work at an inclusive cost of 398. 6d. a day, that he would have an enormous reserve of capacity for busy days or seasons, and that he could well afford to sell his horses and vans.

He seemed willing to be one of the last, we regret to say. He fixed on the "new thing" again. Motors were new—the card said so He falt2rod wh.n we told him of owners whose vans were in hard service, and as good as ever, after six years of running, and after being completely written off as capital. He promised, too, to go into matters " before the end of the year," as he really did not intend to be "one of the last to change "with the times, we added, as we said goodbye.

And all this had arisen without premeditation. Our friend had until then shown the ingenuity of the ostrich, but he was interested at last.