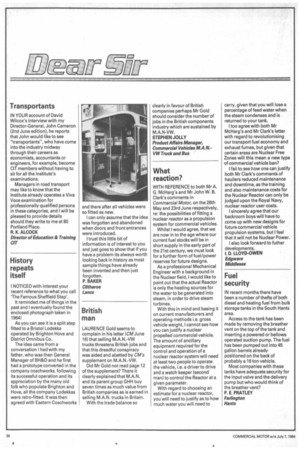 I NOTICED with interest your recent reference to what you call 'The Famous Sheffield Step'.

It reminded me of things in the past and I eventually found the enclosed photograph taken in 1964!

As you can see it is a split step fitted to a Bristol Lodekka operated by Brighton Hove and District Omnibus Co.

The idea came from a conversation I had with my father, who was then General Manager of BH&D and he first had a prototype converted in the company coachworks. following its successful operation and its appreciation by the many old folk who populate Brighton and Hove, all the company Lodekkas were retro-fitted. It was then agreed with Eastern Coachworks and there after all vehicles were so fitted as new.

I can only assume that the idea was forgotten and abandoned when doors and front entrances were introduced.

I trust this little bit of information is of interest to you and just goes to show that if you have a problem its always worth looking back in history as most sample things have already been invented and then just forgotten.