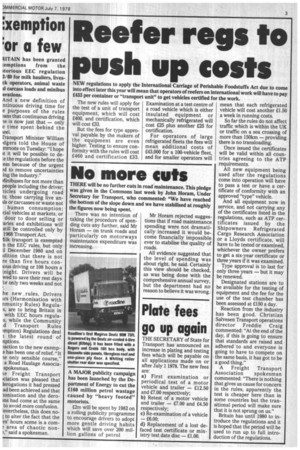 Page 5, 7th July 1978 — No more cuts
Close
Noticed an error?
If you've noticed an error in this article please click here to report it so we can fix it.
Keywords : Types Of Roads, Wealden, Horam, Trunk Road, Road, Motorways In The Republic Of Ireland, Motorway, Business / Finance

THERE will be no further cuts in road 'maintenance. This pledge was given in the Commons last week by John Horam, Under Secretary for Transport, who commented: "We have reached the bottom of the slope down and we have stabilised at roughly the figures now being spent.

There was no intention of taking the procedure of spending cuts any further, said Mr Horam — on trunk roads and particularly on motorways maintenance expenditure was increasing. Mr Horam rejected suggestions that if road maintenance spending were not dramatically increased it would become financially impossible ever to stabilise the quality of roads.

All evidence suggested that the level of spending was about right, he said. Certainly this view should be checked, as was being done with the comprehensive annual survey, but the department had no reason to believe it was wrong.