THE WAY TO CARRY 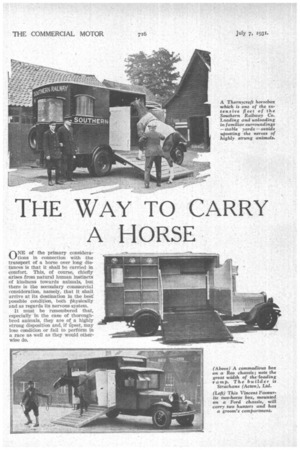 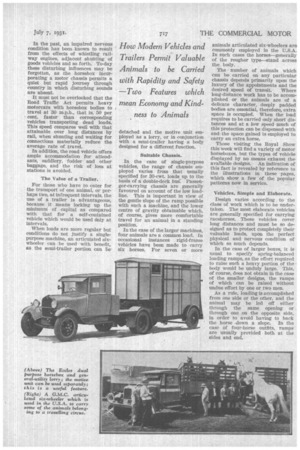 Page 88, 7th July 1931 — THE WAY TO CARRY
Close
Noticed an error?
If you've noticed an error in this article please click here to report it so we can fix it.

ONE of the primary considerations in connection with the transport of a horse over long distances is that it shall be carried in Comfort. This, of course, chiefly arises from natural human instincts of kindness towards animals, but there is the secondary commercial consideration, namely, that it shall arrive at its destination in the best possible condition, both t hysically and as regards its nervous system.

It must be remembered that, especially in the case of thoroughbred animals, they are of a highly strung disposition and, if upset, may lose condition or fail to perform in a race as well as they would otherwise do. In the past, an impaired nervous condition has been known to result from the effects of whistling railway engines, adjacent shunting of goods vehicles and so forth. To-day these disturbing influences may be forgotten, as the horsebox incorporating a motor chassis permits a quiet but rapid journey through country in which disturbing sounds are absent.

It must not be overlooked that the Road Traffic Act permits heavy motorcars with horsebox bodies to travel at 30 m.p.h., that is, 50 per cent, faster than corresponding vehicles transporting dead loads. This speed compares well with that attainable over long distances by rail, when shunting and waiting for connections materially reduce the average rate of travel.

In addition, the road vehicle offers ample accommodation fer attendants, saddlery, fodder and other baggage, and the risk of loss at stations is avoided.

The Value of a Trailer.

For those who have to cater for the transport of one animal, or perhaps two, at infrequent intervals, the use of a trailer is advantageous, because it means locking up the minimum of capital as compared with that for a self-contained vehicle which would be used Only at intervals.

When loads are more regular but conditions do not justify a singlepurpose machine, an articulated sixwheeler can be used• with benefit, as the semi-trailer portion can be detached and the motive unit employed as a lorry, or in conjunction with a semi-trailer having a body designed for a different function.

In the case of single-purpose vehicles, the range of chassis employed varies from that usually specified for 30-cwt. loads up to the basis of a double-deck bus: Passenger-carrying chassis are generally favoured on account of the low loadline. This is important in view of the gentle slope of the ramp possible with such a machine, and the lower centre of gravity obtainable which, of course, gives more comfortable travel for an animal in a standing position.

In the ease ef the larger machines, four animals are a common load. In occasional instances rigid-frame vehicles have been made to carry six horses. For seven or more animals articulated six-wheelers are commonly employed in the U.S.A. In such cases the horses—generally of the rougher type—stand across the body.

The number of animals which can be carried on any particular chassis depends primarily upon the luxury of the appointments and the desired speed of transit. Where long-distance work has to be accomplished or the animals are of a delicate character, deeply padded bodies are essential, therefore, extra space is occupied. When the load requires to be carried only short distances and at a low speed much of this protection can be dispensed with and the space gained is employed to carry an extra horse.

Those visiting the Royal Show this week will find a variety of motor horseboxes, but the types Of vehicle displayed by no means exhaust the available designs. An indication of this fact is revealed by reference to the illustrations in these pages, which show a few of the popular patterns now in service.

Design varies according to the class of work which is to be undertaken. The most elaborate vehicles are generally specified for carrying racehorses. These vehicles cover long distances and must be so designed as to protect completely their valuable loads, upon the perfect physical and nervous condition of which so much depends.

In the case of larger boxes, it is usual to specify spring-balanced loading ramps, as the effort required to raise such a heavy portion of the • body would be unduly large. This, of course, does not obtain in the case of the smaller designs, the ramps of which can be raised without undue effort by one or two men.

As a rule, loading is accomplished from one side or the other, and the animal may be led off either through the same opening or through one on the opposite side, in order to avoid having to back the horse -down a slope. In the case of four-horse outfits, ramps are usually provided both at the sides and end.,