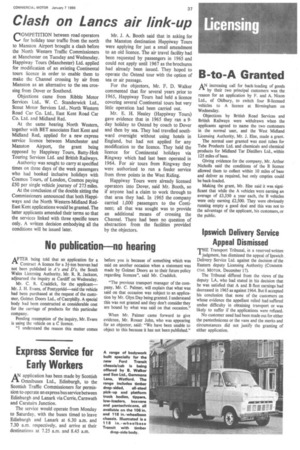 Page 39, 7th January 1966 — Ipswich Delivery Service Appeal Dismissed
Close
Noticed an error?
If you've noticed an error in this article please click here to report it so we can fix it.

THE Transport Tribunal, in a reserved written judgment, has dismissed the appeal of Ipswich Delivery Service Ltd. against the decision of the Eastern deputy Licensing Authority (COMMERCIAL MOTOR, December 17).

The Tribunal differed from the views of the deputy LA, who had stated in his decision that he was satisfied that A and B fleet earnings had decreased in 1965 as against 1964. But ii accepted his conclusion that none of the customers on whose evidence the appellant relied had suffered undue difficulty in obtaining transport or was likely to suffer if the applications were refused.

No customer need had been made out for either the pantechnicons or the vans and the merits and circumstances did not justify the granting of either application.