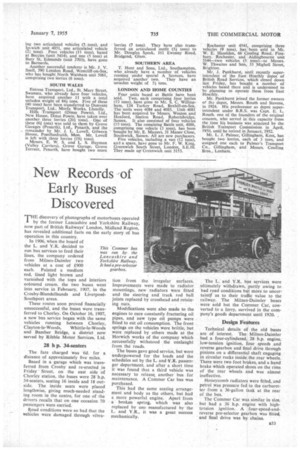 Page 73, 7th January 1955 — New Records of Early Buses Discovered
Close
Noticed an error?
If you've noticed an error in this article please click here to report it so we can fix it.

THE discovery of photographs of motorbuses operated by the former Lancashire and Yorkshire Railway, now part of British Railways' London, Midland Region, has revealed additional facts on the early story of bus operation in this country.

In 1906, when the board of the L. and Y.R. decided to run bus services to feed their lines, the company ordered from Milnes-Daimler two vehicles at a cost of £900 each. Painted a medium red, lined light brown and varnished with the tops and interiors coloured cream, the two buses went into service in February, 1907, in the Crosby-Blundellsands and LiverpoolSouthport areas.

These routes soon proved financially unsuccessful, and the buses were transferred to Chorley. On October 16, 1907, a new bus service began with the same vehicles running between Chorley, Clayton-le-Woods, Whittle-le-Woods and Bamber Bridge, a district now served by Ribble Motor Services, Ltd.

The fare charged was 6d. for a distance of approximately five miles.

Based in a garage which was transferred from Crosby and re-erected in Friday • Street, on the east side of Chorley station, the buses were 28 h.p. 34-seaters, seating 16 inside and 18 outside. The inside seats were placed lengthwise, giving much-needed standing room in the centre, for one of the drivers recalls that on one occasion 70 passengers were carried.

tion from the irregular surfaces. Improvements were made to radiator mountings, new radiators were fitted and the steering and track rod ball joints replaced by crosshead and retaining nuts.

Modifications were also made to the engines to cure constantly fracturing oil pipes, and new type oil pumps were fitted to cut oil consumption. The front springs on the vehicles were brittle, but were replaced by others made at the Horwich works of the company which successfully withstood the onslaught from the roads.

The buses gave good service, but were underpowered for the loads and the schedules set by the L. and Y.R. passenger department, and after a short time it was found that a third vehicle was necessary to release, another bus for maintenance. A Commer Car bus was purchased.

This had the same seating arrangement and body as the others, but had a more powerful engine. Apart from a broken spring, which was also replaced by one manufactured by the L. and YR., it was a great success mechanically. The L. and Y.R. bus services were ultimately withdrawn, partly owing to bad road conditions but more to uncertaint as to their traffic value to the railway. The Milnes-Daimler buses were sold but the Commer Car, converted to a lorry, survived in the company's goods department until 1920. ,

Technical details of the old buses are of interest. The Milnes-Daimler had a four-cylindered, 28 h.p. engine, low-tension ignition, four speeds and reverse gearbox and final drive through pinions on a differential shaft engaging in circular racks inside the rear wheels. There were two foot brakes, and a hand brake which operated shoes on the rims of the rear wheels and was almost ineffective.

Honeycomb radiators were fitted, and petrol was pressure fed to the carburetter from a 36-gallon tank at the rear of the bus.

The Commer Car was similar in size, but had a 36 h.p. engine with hightension ignition. A four-speed-andreverse pre-selector gearbox was fitted, and final drive was by chains.