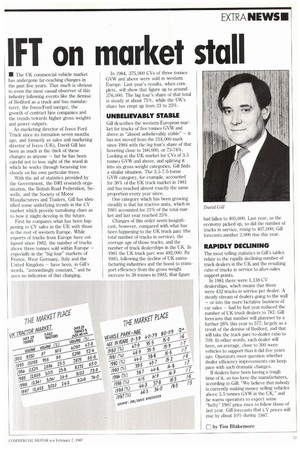 • The UK commercial vehicle market has undergone far-reaching changes in the past five years. That much is obvious to even the most casual observer of this industry following events like the demise of Bedford as a truck and bus manufacturer, the Iveco/Ford merger, the growth of contract hire companies and the trends towards higher gross weights and power outputs.

As marketing director of Iveco Ford Truck since its formation seven months ago, and formerly as sales and marketing director of lveco (UK), David Gill has been as much in the thick of these changes as anyone — but he has been careful not to lose sight of the wood in which he works through focussing too closely on his own particular trees.

With the aid of statistics provided by the Government, the DRI research organisation, the British Road Federation, Sewells, and the Society of Motor Manufacturers and Traders, Gill has identified some underlying trends in the CV market which provide tantalising clues as to how it might develop in the future.

First he compares what has been happening to CV sales in the UK with those in the rest of western Europe. While exports of trucks from Europe have collapsed since 1982, the number of trucks above three tonnes sold within Europe — especially in the "big four" markets of France, West Germany, Italy and the United Kingdom — have been, in Gill's words, "astonishingly constant," and he sees no indication of that changing. In 1984, 375,000 CVs of three tonnes GVW and above were sold in western Europe. Last year's results, when complete, will show that figure up to around 376,000. The big four's share of that total is steady at about 75%, while the UK's share has crept up from 23 to 25%.

Gill describes the western European market for trucks of five tonnes GVW and above as "almost unbelievably stable" — it has not moved from the 218,000 mark since 1984 with the big four's share of that hovering close to 160,000, or 73-74%. Looking at the UK market for CVs of 3.5 tonnes GVW and above, and splitting it into six gross weight categories, Gill finds a similar situation. The 3.5-7.5-tonne GVW category, for example, accounted for 36% of the UK truck market in 1981 and has reached almost exactly the same proportion every year since.

One category which has been growing steadily is that for tractive units, which in 1981 accounted for 21% of the total market and last year reached 25%.

Changes of this order seem insignificant, however, compared with what has been happening to the UK truck pare (the total number of trucks in service), the average age of those trucks, and the number of truck dealerships in the UK. In 1981 the UK truck pare was 492,000. By 1985, following the decline of UK manufacturing industries and the boost to transport efficiency from the gross weight increase to 38 tonnes in 1983, that figure had fallen to 405,000. Last year, as the economy picked up, so did the number of trucks in service, rising to 407,000; Gill forecasts another 2,000 rise this year.

The most telling statistics in Gill's tables relate to the rapidly declining number of truck dealers in the UK and the resulting ratio of trucks in service to after-sales support points. In 1981 there were 1,138 CV dealerships, which means that there were 432 trucks in service per dealer. A steady stream of dealers going to the wall — or into the more lucrative business of car sales — had by last year reduced the number of UK truck dealers to 783. Gill forecasts that number will plummet by a further 26% this year to 577, largely as a result of the demise of Bedford, and that will take the truck parc-to-dealer ratio to 709. In other words, each dealer will have, on average, close to 300 more vehicles to support than it did five years ago. Operators must question whether dealer efficiency improvements can keep pace with such dramatic changes.

If dealers have been having a tough time of it, so too have the manufacturers, according to Gill: We believe that nobody is currently making money selling vehicles above 3.5 tonnes GVW in the UK," and he warns operators to expect some "hefty" 1987 price rises to follow those of last year. Gill forecasts that CV prices will rise by about 10% during 1987.