CONSULTATIONS were held "through thi usual channels" before it was 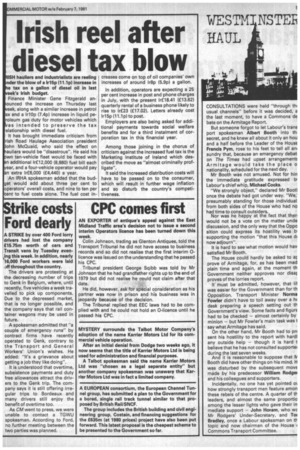 Page 7, 7th February 1981 — CONSULTATIONS were held "through thi usual channels" before it was
Close
Noticed an error?
If you've noticed an error in this article please click here to report it so we can fix it.
Keywords : John Horam, Albert Booth, Politics

decided, a the last moment, to have a Commons de bate on the Armitage Report.

But someone forgot to let Labour's trans port spokesman Albert Booth into thi secret, and he knew all about it only an hou and a half before the Leader of the HOUSE Francis Pym, rose to his feet to tell all an sundry that, because an emergency debat on The Times had upset arrangements Armitage would take the place o nationality, scheduled for the next day. Mr Booth was not amused. Not for hin the immediate gratitude expressed 13, Labour's chief whip, Michael Cocks.

"We strongly object," declared Mr Booth once the debate had got under way. "We,' presumably standing for those individual from both sides of the House who had no had time to consult outsiders.

Nor was he happy at the fact that then would not be a vote on the matter unde discussion, and the only way that the Oppo sition could express its hostility was ID, supporting the motion "that this House c11 now adjourn".

It is hard to see what motion would hay satisfied Mr Booth.

The House could hardly be asked to ar prove of Armitage, for, as has been mad plain time and again, at the moment th Government neither approves nor disar proves of the lorries report.

It must be admitted, however, that lit was easier for the Government than for th Opposition. Transport Minister Norma Fowler didn't have to toil away over a ht desk preparing a speech setting out th Government's view. Some facts and figurs had to be checked — almost certainly by minion — but Mr Fowler's main task was t say what Armitage has said.

On the other hand, Mr Booth had to pr( sent his hostility to the report with hardl any outside help — though it is hard t believe that he has not consulted supportei during the last seven weeks. And it is reasonable to suppose that f‘i Booth did have other things on his mind. H was disturbed by the subsequent MOVE made by his predecesor William Rodgei and his colleagues and supporters.

Incidentally, no one has yet pointed ot how strongly transport men feature amon these rebeis of the centre. A quarter of th leaders, and almost the same proportio among the lesser lights who gave their in mediate support — John Horam, who ws Mr Rodgers' Under-Secretary, and Tol Bradley, once a Labour spokesman on th topic and now chairman of the House ( Commons Transport Committee.