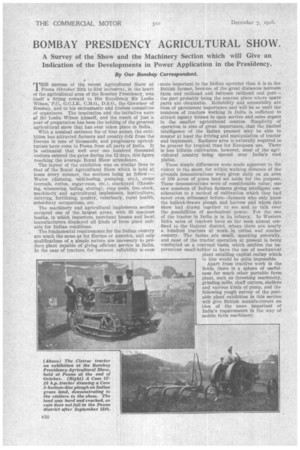 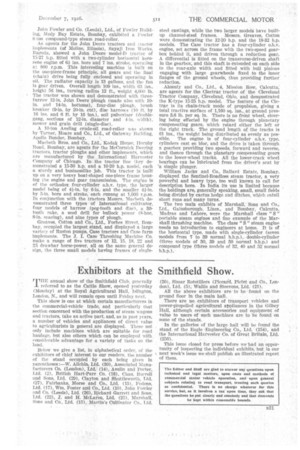 By Our Bombay Correspondent.

THE success of the recent Agricultural Show at Poona (October 20th to 31st inclusive), in the heart of the agricultural area of the Bombay Presidency, was itself a fitting reward to His Excellency Sir Leslie

Wilson; P.O., G.C.I.E., D.S.O., the Governor of Bombay, and to his enthusiastic and tireless committee of organizers. The inspiration and the initiative were of Sir Leslie Wilson himself, and the result of just a year of preparation has been the holding of the greatest agricultural show that has ever taken place in India.

With a nominal entrance fee of four annas, the exhibition has attracted farmers and country-folk from the Deccan in tens of thousands, and progressive agriculturists have come to Poona from all parts of India. It is estimated that well over one hundred thousand. visitors entered the gates during the 12 days, this figure reaching the average Royal Show attendance.

The machinery and agricultural implements section occupied one of the largest areas, with 30 spacious booths, in which importers, merchant houses and local manufacturers displayed all kinds of farm plant suitable for Indian conditions.

The fundamental requirements for the Indian country are much the same as for Europe or America, and only modifications of a simple nature are necessary to produce plant capable of giving efficient service in India. In the case of tractors, for instance, reliability is even • more important to the Indian operator than it is to the Bilitish farmer, because of the great distances between farm and railhead and between railhead and port-the port probably being the nearest place where spare parts are obtainable. Reliability and accessibilty are thus of paramount importance and will be so until the numbers of tractors working in India is sufficient to attract agency houses to open service and sales depots in the smaller agricultural centres. Simplicity of operation is also of great importance, that the limited intelligence of the Indian peasant may be able to master at least the driving and manipulation of tractor and implement. Radiator area is naturally required to be greater for tropical than for European use. There is less hillside cultivation, however, most of the agricultural country being spread over India's vast plains.

These simple differences were made apparent to the visitor to the show, for within walking distance of the grounds demonstrations were given daily on an area of 200 acres of grass land set aside for the purpose. These demonstrations were of considerable value; one saw numbers of Indian farmers giving intelligent consideration to a method of cultivation which they had never even witnessed before—farmers who only knew the bullock-drawn plough and harrow and whom this show had drawn together to see and to talk over the possibilities of mechanical power. For the use. of the tractor in India is in its infancy. In Western India sales of tractors have so far been almost confined to the Gujerat district, where there are nearly a hundred tractors at work in cotton and similar country. The farms are small, speaking generally, and most of the tractor operation at present is being conducted on a contract basis, which enables the imperunious small-bolder to have the use of mechanical

plant entailing capital outlay which to him would be quite impossible. Apart from tractive work in the fields, there is a sphere of useful ness for much other portable farm plant, such as threshing machinery, grinding mills, chaff cutters, shellers and various kinds of pump, and the following rough survey of the port

able plant. exhibition in this section

will give British manufacturers an idea of the more important of India's requirements in the way of mobile farm machinery.

As agents for the John Deere tractors and tractor implements (of Moline, Illinois), Sayaji Iron Works, liaroda, showed a John Deere model-D tractor of 15-27 h.p. fitted with a two-cylinder horizontal kerosene engine of 6i ins, bore and 7 ins, stroke, operating at 800 r.p.m. This interesting machine is built on the one-piece-frame principle, all gears and the final (chain) drive being fully enclosed and operating in oil. The radiator capacity is 13 gallons, and the fan is gear driven. Overall length 109 ins., width 63 ins., height 56 ins., turning radius 12 ft., weight 4,000 lb. The tractor was shown and demonstrated with threefurrow 12-in. John Deere plough (made also with 10in. and 14-in. bottoras), four-disc plough, brush breaker (9-in. by 20-in, cut), disc harrows (10 ft. by 16 Ins. and 6 ft. by 16 ins.), soil pulverizer (doublegang, sections of 12-in, diameter and 4-111. width), mower and grain drill (single-disc).

Macbeth Bros. and Co., Ltd., Kodak House, Hornby Road, Bombay, are agents for the McCormick Deering tractors, tractor ploughs and other implements, which are manufactured by the International Harvester Company of Chicago. In the tractor line they demonstrated a 15-30 h.p. and a 10-20 h.p. model, each a sturdy and businesslike job. This tractor is built up on a very heavy boat-shaped one-piece frame lionsbig the engine and gear transmission. The engine is of the orthodox four-cylinder o.h.v. type, the .larger model being of 41-in, by 6-in, and the smaller 41-in. by 5-in. bore and stroke, each runnng at 1,000 r.p.m. In conjunction with the tractors Messrs. Macbeth demonstrated three types of International cultivator, four models of harrow (peg-tooth and disc), a 30tooth rake, a seed drill for bullock power (8-hoe, 8,1n. spacing), and nine types of plough.

Greaves, Cotton and Co., Ltd., Forbes Street, Bombay. occupied the largest stand, and displayed a large variety of Ruston pumps, Case tractors and Case farm Implements. The J. I. Case Threshing Machine Co. make a range of five tractors of 12, 15, 18, 22 and 25 drawbar horse-power, all on the same general design, the three small models having frames of single

steel castings, while the two larger models have builtup channel-steel frames. Messrs. Greaves, Cotton were demonstrating the 12-20 h.p. and the 18-32 h.p. models. The Case tractor has a four-cylinder o.h.v. engine, set across the frame with the two-speed gearbox behind it, and driven through a reduction gear. A differential is fitted on the transverse-driven shaft in the gearbox, and this shaft is extended on each side to the rear-axle width and fitted with bull pinions engaging with large gearwheels fixed to the inner flanges of the ground wheels, thus providing further reduction.

Ahmuty and Co., Ltd., 4, Mission Row, Calcutta, are agents for the Clectrae tractor of the Cleveland Tractor Company, Cleveland, Ohio, and dempnstrated the K-type 15-25 h.p. model. The feature of the Cietra,c is its chain-track mode of propulsion, giving a total tractive surface of 1,160 sq. ins., at ground pressure 3.6 lb. per sq. in. There is no front wheel, steering being effected by the engine through planetary compensating gears, which retard either the left or the right track. The ground length of the tracks is 61 ins., the weight being distributed as evenly as pos sible. The engine is of four-cylinder o.h.v. type, cylinders cast en bloc, and the drive is taken through a gearbox providing two speeds, forward and reverse, and thence through the planetary compensating gears to the lower-wheel tracks. All the lower-track wheel bearings can be lubricated from the driver's seat by 'a simple plunger.

William Jacks and Co., Ballard Estate, Bombay, displayed the Sentinel-Roadless steam tractor, a very powerful and heavy type, too well known to call for description here. In India Its use is limited because the holdings are, generally speaking, small, small fields being divided by cactus hedge and ditches, which entail short runs and many turns.

The two main exhibits of Marshall, Sons and Co., Ltd., Gainsborough, Lines., and Bombay, Calcutta, Madras and Lahore, were the Marshall class "5" portable steam engines and fine example of the Marshall thrashing machine. The class " S " steam engine needs no introduction to engineers at home. It is of the horizontal type, made with single-cylinder (seven models from 7 to 39 normal b.h.p.), double-cylinder (three models of 30, 39 and 50 normal b.h.p.) and compound type (three models of 32, 40 and 52 normal b.h.p.).