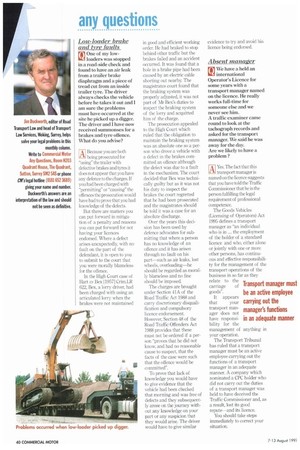 Page 42, 7th August 1997 — Absent manager
Close
Noticed an error?
If you've noticed an error in this article please click here to report it so we can fix it.

We have a held an international Operator's Licence for some years with a transport manager named on the licence. He really works full-time for someone else and we never see him.

A traffic examiner came round to look at the tachograph records and asked for the transport manager. We said he was away for the day.

Are we likely to have a problem ?

A Yes. The fact that this

transport manager is named on the licence suggests that you have told the Traffic Commissioner that he is the person fulfilling the legal requirement of professional competence.

The Goods Vehicles (Licensing of Operators) Act 1995 defines a transport manager as "an individual who is in .... the employment of the holder of a standard licence and who, either alone or jointly with one or more other persons, has continuous and effective responsibility for the management of the transport operations of the business in so far as they the of relate to carriage goods".

You should take steps immediately to correct your situation.