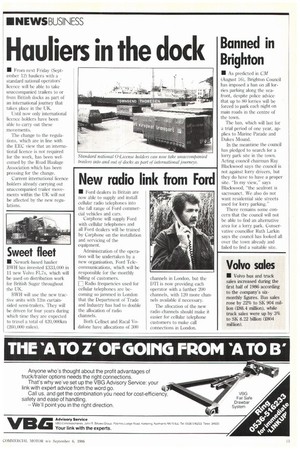 Page 15, 6th September 1986 — Banned in Brighton
Close
Noticed an error?
If you've noticed an error in this article please click here to report it so we can fix it.
Keywords : Brighton And Hove, Monarch's Way, Brighton

• As predicted in CM (August 16), Brighton Council has imposed a ban on all lorries parking along the seafront, despite police advice that up to 80 lorries will be forced to park each night on main roads in the centre of the town.

The ban, which will last for a trial period of one year, applies to Marine Parade and Dukes Mound.

In the meantime the council has pledged to search for a lorry park site in the town. Acting council chairman Ray Blackwood says the council is not against lorry drivers, but they do have to have a proper site. "In my view,'' says Blackwood, "the seafront is sacrosanct. We also do not want residential side streets used for lorry parking."

There remains some concern that the council will not be able to find an alternative area for a lorry park. Conservative councillor Ruth Larkin says the council has looked all over the town already and failed to find a suitable site.