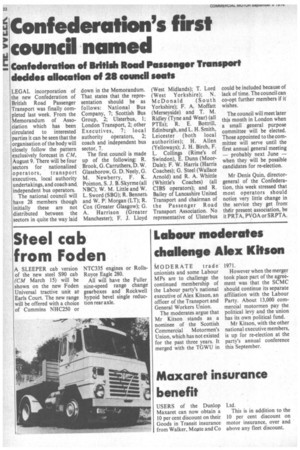 Page 24, 6th September 1974 — Confederation's first council named
Close
Noticed an error?
If you've noticed an error in this article please click here to report it so we can fix it.
Keywords : Ulsterbus, National Bus Company

LEGAL incorporation of the new Confederation of British Road Passenger Transport was finally completed last week. From the Memorandum of Association which has been circulated to interested parties it can be seen that the organisation of the body will closely follow the pattern exclusively forecast in CM, August 9. There will be four sectors for nationalized operators, transport executives, local authority undertakings, and coach and, independent bus operators.

The national council will have 28 members though initially these are not distributed between the sectors in quite the way laid down in the Memorandum. That states that the representation should be as follows: National Bus Company, 7; Scottish Bus Group. 2; Ulsterbus, 1; London Transport, 2; other Executives, 7; local authority operators, 2; coach and independent bus sector, 7.

The council will meet later this month in London when a small general purpose committee will be elected. Those appointed to the committee will serve until the first annual general meeting — probably next June — when they will be possible candidates for re-election.

Mr Denis Quin, directorgeneral of the Confederation, this week stressed that most operators should notice very little change in the service they get from their present association, be it PRTA, PVOA or SRPTA.