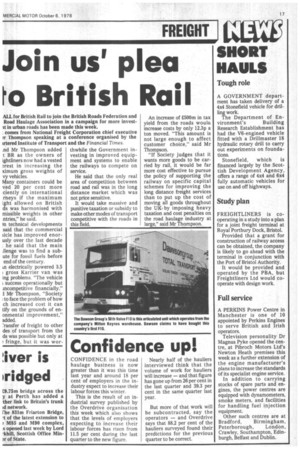 A GOVERNMENT department has taken delivery of a 4x4 Stonefield vehicle for drilling work. The Department of En vironment's Building Research Establishment has had the V6-engined vehicle fitted with a Drillmaster 18 hydraulic rotary drill to carry out experiments on foundations.

Stonefield, which is financed largely by the Scottish Development Agency, offers a range of 4x4 and 6x4 fully automatic vehicles for use on and off highways.

FREIGHTLINERS is cooperating in a study into a plan for a joint freight terminal at Royal Portbury Dock, Bristol.

Provided that a grant for construction of railway access can be obtained, the company is likely to go ahead with the terminal in conjunction with the Port of Bristol Authority.

It would be provided and operated by the PBA, but Freightliners Ltd would cooperate with design work.

A PERKINS Power Centre in Manchester is one of 10 appointed by Perkins Engines to serve British and Irish operators.

Television personality Dr Magnus Pyke opened the centre, at Pibroch Motors Ltd's Newton Heath premises this week as a further extension of the engine manufacturer's plans to increase the standards of its specialist engine service.

In addition to carrying stocks of spare parts and engines, the power centres are equipped with dynamometers, smoke meters, and facilities for handling fuel injection equipment.

Other such centres are at Bradford, Birmingham, Peterborough, London, Crawley, Southampton, Edinburgh, Belfast and Dublin.