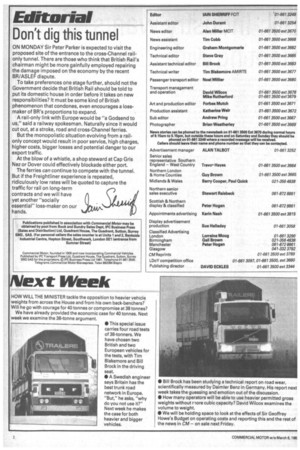 Page 2, 6th March 1982 — Next Week
Close
Noticed an error?
If you've noticed an error in this article please click here to report it so we can fix it.
Keywords : Bar Of England And Wales, Bencher, Environment

HOW WILL THE MINISTER tackle the opposition to heavier vehicle weights from across the House and from his own back-benchers? Will he go with courage for 40 tonnes or compromise at 38 tonnes?

We have already provided the economic case for 40 tonnes. Next week we examine the 38-tonne argument.

• This special issue carries four road tests of 38-tonners. We have chosen two British and two European vehicles for the tests, with Tim Blakemore and Bill Brock in the driving seat.

• A Swedish engineer says Britain has the best trunk road network in Europe. "But," he asks, "why do you not use it?" Next week he makes the case for both heavier and bigger vehicles.