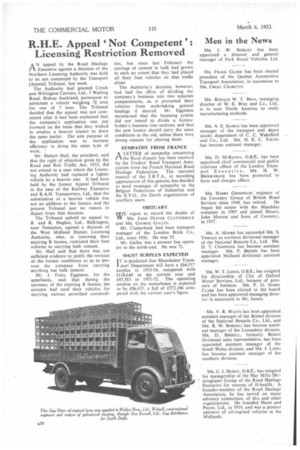 Page 32, 6th March 1953 — R.H.E. Appeal 'Not Competent ' : Licensing Restriction Removed
Close
Noticed an error?
If you've noticed an error in this article please click here to report it so we can fix it.
Keywords : Business / Finance, Law / Crime

AN appeal by the Road Haulage Executive against a decision of the Northern Licensing Authority was held to be not competent by the Transport [Appeal] Tribunal, last week.

The Authority had granted Crook and Willington Carriers, Ltd., 5 Watling Road, Bishop Auckland, permission to substitute a vehicle weighing 71 tons for one of 7 tons. The Tribunal decided that the appeal was not competent after it had been explained that the company's application was put forward on the basis that they wished to employ a heavier tractor to draw the same trailer. The sole purpose of the application was to increase efficiency in doing the same type of work. '

Mr. Hubert Hull, the president, said that the right of objection given by the Road and Rail Traffic Act, 1933, did not extend to a case where the Licensing Authority had replaced a lighter vehicle by a heavier one. It had been held by the former Appeal Tribunal in the case of the Railway Executive and R.A.H. Transporters, Ltd., that the substitution of a heavier vehicle was not an addition to the licence, and the present Tribunal saw no reason to depart from that decision.

The Tribunal upheld an appeal by R and K. Hughes, Ltd., Bulkington, near Nuneaton, against a decision of the West Midland Deputy Licensing Authority, who, in renewing their expiring B licence, restricted their four vehicles to carrying bulk cement.

Mr. Hull said that there was not sufficient evidence to justify the revision of the former conditions so as to prevent the company from carrying anything but bulk cement.

Mr. J. Foley Egginton, for the appellants, said that during the currency of the expiring B licence, the concern had used their vehicles for carrying various permitted cornmodi

ties, but since last February the carriage of cement in bulk had grown to such an extent that they had placed all their four vehicles on that traffic alone.

The Authority's decision, however, had had the effect of dividing the company's business into two separate compartments, as it prevented their vehicles from undertaking general haulage if desired. Mr. Egginton maintained that the licensing system did not intend to divide a licenceholder's business into sections, and that the new licence should carry the same conditions as the old, unless there were strong reasons for altering them.