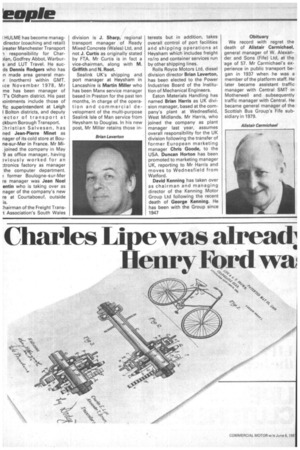 Page 64, 6th June 1981 — imple
Close
Noticed an error?
If you've noticed an error in this article please click here to report it so we can fix it.
Keywords : British Rail, Sealink, Heysham, Wednesfield

I HULME has become managdirector (coaching and retail) ireater Manchester Transport -1 responsibility for Char)Ian, Godfrey Abbot, Warburs and LUT Travel. He sucds Dennis Rodgers who has ,n made area general manr (northern) within GMT. ice November 1978, Mr me has been manager of T's Oldham district. His past iointments include those of 'fie superintendent at Leigh I Bolton districts, and deputy .ector of transport at ckburn Borough Transport. :hristian Salvesen, has nod Jean-Pierre Minet as nager of its cold store at Boune-sur-Mer in France. Mr Mijoined the company in May 9 as office manager, having viously worked for an 3fronics factory as manager the computer department.

former Boulogne-sur-Mer re manager was Jean Noel entin who is taking over as nager of the company's new re at Courtaboeuf, outside is.

:hairman of the Freight Trans't Association's Association's South Wales division is J. Sharp, regional transport manager of Ready Mixed Concrete (Wales) Ltd, and not J. Curtis as originally stated by ETA. Mr Curtis is in fact a vice-chairman, along with M. Griffith and N. Root.

Sealink UK's shipping and port manager at Heysham in Lancashire is Martin Miller who has been Manx service manager based in Preston for the past ten months, in charge of the operation and commercial development of the multi-purpose Sealink Isle of Man service from Heysham to Douglas. In his new post, Mr Miller retains those in terests but in addition, takes overall control of port facilities and shipping operations at Heysham which includes freight ro/ro and container services run by other shipping lines.

Rolls Royce Motors Ltd, diesel division director Brian Leverton, has been elected to the Power Industries Board of the Institution of Mechanical Engineers.

Eaton Materials Handling has named Brian Harris as UK division manager, based at the company's plant at Wednesfield, West Midlands. Mr Harris, who joined the company as plant manager last year, assumes overall responsibility for the UK division following the transfer of former European marketing manager Chris Goode, to the USA. Duncan Horton has been promoted to marketing manager UK, reporting to Mr Harris and moves to Wednesfield from Watford.

David Kenning has taken over as chairman and managing director of the Kenning Motor Group Ltd following the recent death of George Kenning. He has been with the Group since 1947 We record with regret the death of Alistair Carmichael, general manager of W. Alexander and Sons (Fife) Ltd, at the age of 57. Mr Carmichael's experience in public transport began in 1937 when he was a member of the platform staff. He later became assistant traffic manager with Central SMT in Motherwell and subsequently traffic manager with Central. He became general manager of the Scottish Bus Group's Fife subsidiary in 1979.