Story Behind the Foden Fireworks 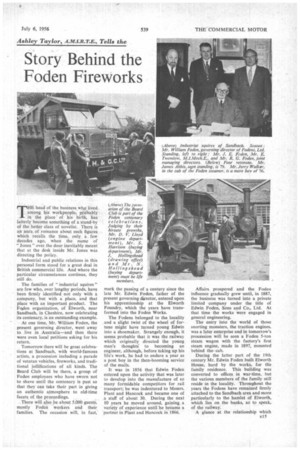 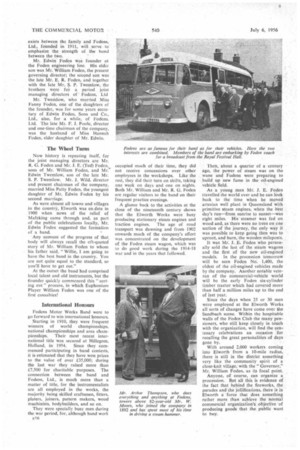 THE head of the business who lived among his workpeople, probably in the place ' of his birth, has latterly become something of a stand-by of the better class of novelist. There is an aura of romance about such figures which recalls •the time, only a few decades ago, when the name of " Jones " over the door inevitably meant that at the desk inside Mr. Jones was directing the policy.

Industrial and public relations in this personal form stood for a great deal in British commercial life. And where the particular circumstances continue, they still do.

The families of " industrial squires " are few who, over lengthy periods, have been firmly identified not only with a company, but with a place, and that place with an important product. The Foden organization, of Elworth, near Sandbach, in Cheshire, now celebrating its centenary, is an outstanding example.

At one time, Mr. William Foden, the present governing director, went away to live in Australia—and then there were even local petitions asking for his return.

Tomorrow there will be great celebrations at Sandbach, with world-famous artists, a procession including a parade of veteran vehicles, fireworks, and traditional jollifications of all kinds. The Beard Club will be there, a group of Foden employees who have sworn not to shave until the centenary is past so that they can take their part in giving an authentic atmosphere to old-time facets of the proceedings.

There will also be about 5,000 guests, mostly Foden workers and their families. The occasion will, in fact, mark the passing of a century since the late Mr. Edwin Foden, father of the present governing director, entered upon his apprenticeship at the Elworth Foundry, which the years have transformed into the Foden Works.

The Fodens belonged to the locality and a slight twist of the wheel of fortune might have turned young Edwin into a shoemaker. Strangely enough, it seems probable that it was the railway which originally directed the young man's thoughts' to becoming an engineer, although, before taking up his life's work, he had to endure a year as a post boy in the then-booming service of the mails.

It was in 1856 that Edwin Foden entered upon the activity that was later to develop into the manufacture of so many formidable competitors for rail transport; he was indentured to Messrs. Plant and Hancock and became one of a staff of about 30._ During the next 10 years he moved around, gaining a variety of experience until he became a partner in Plant and Hancock in 1366.

Affairs prospered and the Foden influence gradually grew until, in 1887, the business was turned into a private limited company under the title of Edwin Foden, Sons and Co., Ltd. At that time the works were engaged in general engineering.

The entry into the world of those snorting monsters, the traction engines, was a later enterprise and in tomorrow's procession will be seen a Foden 5-ton steam wagon with the factory's first steam engine, made in 1897, mounted behind the cab.

During the latter part of the 19th century Mr. Edwin Foden built Elworth House, hard by the works, for the family residence. This building was converted to offices in war-time, but the various members of the family still reside in the locality. Throughout the years the Fodens have remained firmly attached to the Sandbach area and more particularly to the hamlet of Elworth, which lies on the banks, so to speak, of the railway.

A glance at the relationship which a15

exists between the family and Fodens, Ltd., founded in 19H, will serve to emphasize the strength of the bond between the two.

Mr. Edwin Foden was founder 01 the Foden engineering line. His elder son was Mr. William Foden, the present governing director; the second son was the late Mr. E. R. Foden, and together with the late Mr. q. P. Twemlow, the brothers were for a period joint managing directors of Fodens, Ltd

Mr. Twemlow, who married Miss Fanny Foden, one of the daughters of the founder, was for some years secretary of Edwin Foden, Sons and Co., Ltd., also, for a while, of Fodens, Ltd. The late Mr. F. J. Poole, director and one-time chairman of the company, was the husband of Miss Hannah Foden, elder daughter of Mr. Edwin.

Now history is repeating itself, for the joint managing directors are Mr.

As were almost all towns and villages in the country, Elworth was en -fete in 1900 when news of the relief of Mafeking came through and, as part of the public celebrations locally, Mr. Edwin Foden suggested the formation of a band.

Any account of the progress of that body will always recall the oft-quoted story of Mr. William Foden to whom his father said, " Willie, I am going to have the best band in the country. You are not quite equal to the standard, so you'll have to get out."

At the outset the band had comprised local talent and old instruments, but the founder quickly commenced this " sorting out" process, in which Euphonium Player William Foden was one of the first casualties!

Starting in 1910, they were frequent winners of world championships, national championships and area championships. Their most recent international title was secured at Hillegom,

Holland, in 1954. Since they commenced participating in band contests, it is estimated that they have won prizes to the value of over 135,000; during the last war they raised more than £7,500 for charitable purposes. The connection between the band and Fodens, Ltd., is much more than a matter of title, for the instrumentalists are all employed in the works, the majority being skilled craftsmen, fitters, platers, joiners, pattern makers, wood machinists, bodybuilders, and so on.

They were specially busy men during the war period, for, although hand work E16 occupied much of their time, they did not receive concessions over other employees in the workshops. Like the rest, they did their turn on shifts, taking one week on days and one on nights. Both Mr. William and Mr. R. G. Foden are regular visitors to the band on their frequent practice evenings.

A glance back to the activities at the close of the nineteenth century shows that the Elworth Works were busy producing stationary steam engines and traction engines. The age of road transport was dawning and from 1902 onwards much of the company's effort was concentrated on the development of the Foden steam wagon, which was to do good work during the 1914-18 war and in the years that followed.

Then, about a quarter of a century ago, the power of steam was on the wane and Fodens were preparing to .build up new fame in the oil-engined vehicle field.

As a young man Mr. J. E. Foden travelled the world over and he can look back to the time when he moved artesian well plant in Queensland with primitive steam engines, when the best day's run—from sunrise to sunset—was eight miles. His steamer was fed on wood and, as there were no trees on one section of the journey, the only way it was possible to keep going then was to uproot, and burn, the wooden mileposts.

It was Mr. J. E. Foden who personally sold the last of the steam wagons and the first of the new oil-engined models. In the procession tomorrow will be seen Foden No. 1,400, the oldest of the oil-engined vehicles made by the company. Another notable veteran of the commercial-vehicle world will be the early Foden six-cylinder timber tractor which had covered more than half a million miles up to the end of last year.

Since the days when 25 or 30 men were employed at the Elworth Works all sorts of changes have come over the Sand bach scene. Within the hospitable walls of the Foden Club the many pensioners, who still keep closely in touch with the organization, will find the centenary celebrations an occasion for recalling the great personalities of days gone by.

With around 2,000 workers coming into Elworth from a 10-mile radius, there is still in the district something very like the community spirit of a close-knit village, with the "Governor," Mr. William Foden, as its focal point.

Anyone, of course, can organize a procession. But all this is evidence of the fact that behind the fireworks, the parades and the jollifications, there is in Elworth a force that does something rather more than achieve the normal commercial organization's objective of producing goods that the public want to buy.