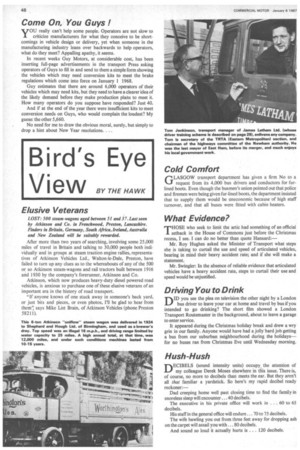 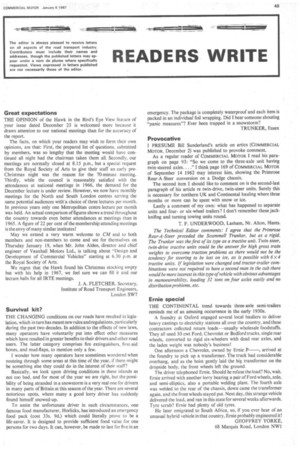 LOST: 500 steam-wagons aged between 51 and 37. Last seen by Atkinson and Co. in Frenchwood, Preston, Lancashire. Finders in Britain, Germany, South Africa, Ireland, Australia and New Zealand will be suitably rewarded.

After more than two years of searching, involving some 25,000 miles of travel in Britain and talking to 30,000 people both individually and in groups at steam traction engine rallies, representatives of Atkinson Vehicles Ltd., Walton-le-Dale, Preston, have failed to turn up any clues as to the whereabouts of any of the 500 or so Atkinson steam-wagons and rail tractors built between 1916 and 1930 by the company's forerunner, Atkinson and Co.

Atkinson, which now produces heavy-duty diesel powered road vehicles, is anxious to purchase one of these elusive veterans of an important era in the history of road transport.

"If anyone knows of one stuck away in someone's back yard, or just bits and pieces, or even photos, I'll be glad to hear from them", says Mike List Brain, of Atkinson Vehicles (phone Preston 58211).

GLASGOW transport department has given a firm No to a request from its 4,000 bus drivers and conductors for furlined boots. Even though the busmen's union pointed out that police and firemen were being given fur-lined boots, the department insisted that to supply them would be Uneconomic because of high staff turnover, and that all buses were fitted with cabin heaters.

THOSE who seek to limit the attic had something of an official 1. setback in the House of Commons just before the Christmas recess, I see. I can do no better than quote Hansard:— Mr. Roy Hughes asked the Minister of Transport what steps she is taking to curtail the use and speed of articulated vehicles, bearing in mind their heavy accident rate; and if she will make a statement.

Mr. Swingler: In the absence of reliable evidence that articulated vehicles have a heavy accident rate, steps to curtail their use and speed would be unjustified.

Driving You to Drink

DID you see the plea on television the other night by a London bus driver to leave your car at home and travel by bus if you intended to go drinking? The short film showed a London Transport Routemaster in the background, about to leave a garage to enter service.

It appeared during the Christmas holiday break and drew a wry grin in our family. Anyone would have had a jolly hard job getting a bus from our suburban neighbourhood during the holidays— for no buses ran from Christmas Eve until Wednesday morning.

DECIBELS (sound intensity units) occupy, the attention of my colleague Derek Moses elsewhere in this issue. There is, of course, no more to decibels than meets the ear. But they aren't all that familiar a yardstick. So here's my rapid decibel ready reckoner:—

The executive in his private office will work in . . 60 to 65 decibels.

The wife bawling you out from three feet away for dropping ash on the carpet will assail you with ... 80 decibels.

THE OPINION of the Hawk in the Bird's Eye View feature of your issue dated December 23 is welcomed more because it draws attention to our national meetings than for the accuracy of the report.

The facts, on which your readers may wish to form their own opinions, are that: First, the prepared list of questions, submitted by members, was so lengthy that the meeting would have continued all night had the chairman taken them all Secondly, our meetings are normally closed at 8.15 p.m., but a special request from the Royal Society of Arts to give their staff an early preChristmas night was the reason for the 70-minute meeting. Thirdly, while the council is reasonably satisfied with the attendances at national meetings in 1966, the demand for the December lecture is under review. However, we now have monthly meetings for the North and South London centres serving the same potential audiences witlia choice of three lectures per month. In previous years only one Metropolitan centre lecture per month was held. An actual comparison of figures shows a trend throughout the country towards even better attendances at meetings than in 1965. A figure of 22 per cent of the membership attending meetings is the envy of many similar institutes!

May we extend a very warm welcome to CM and to both members and non-members to come and see for themselves on Thursday January 19, when Mr. John Alden, director and chief engineer of Vauxhall Motors Ltd., is talking about "Design and Development of Commercial Vehicles" starting at 6.30 p.m. at the Royal Society of Arts.

We regret that the Hawk found his Christmas stocking empty but with his help in 1967, we feel sure we can fill it and our lecture halls for all IRTE meetings.

THE CHANGING conditions on our roads have resulted in legislation, which in turn has meant new rules and regulations. particularly during the past two decades. In addition to the effects of new laws, many operators have voluntarily put into effect other measures which have resulted in greater benefits to their drivers and other road users. The latter category comprises fire extinguishers, first-aid boxes, and mud-flaps, to mention only a few.

I wonder how many operators have sometimes wondered when routeing through some areas at this time of the year, if there might be something else they could do in the interest of their stall?

Basically, we look upon driving conditions in these islands as not too bad, and for most of the year we are right, but the possibility of being stranded in a snowstorm is a very real one for drivers in many parts of Britain at this season of the year. There are several notorious spots, where many a good lorry driver has suddenly found himself snowed-up.

To assist the unfortunate driver in such circumstances, one famous food manufacturer, Horlicks, has introduced an emergency food pack (cost 33s. 9d.) which could literally prove to be a life-saver. It is designed to provide sufficient food value for one persons for two days. It can, however, be made to last for five in an

emergency. The package is completely waterproof and each item is packed in an individual foil wrapping. Did I hear someone shouting "panic measures"? Ever been trapped in a snowstorm?

As a regular reader of COMMERCIAL MOTOR I read his paragraph on page 93: "So we come to the three-axle unit having twin-steered axles.. . ." I think page 169 of COMMERCIAL MOTOR of September 14 1962 may interest him, showing the Primrose Rear-A-Steer conversion on a Dodge chassis.

The second item I should like to comment on is the second-last paragraph of his article re twin-drive, twin-steer units. Surely this is necessary for northern UK and Continental hauling where three months or more can be spent with snow or ice.

Lastly a comment of my own: what has happened to separate units and fouror six-wheel trailers? I don't remember these jackknifing and turning towing units round.

The Technical Editor comments: I agree that the Primrose Rear-A-Steer preceded the Scammell Trunker, but as a rigid. The Trunker was the first of its type as a tractive unit. Twin-steer, twin-drive tractive units could be the answer for high gross train weights to overcome traction problems as there would not be the tendency for steering to be lost on ice, as is possible with 6 x 4 tractive units. If legislation were changed and tractor-trailer combinations were not required to have a second man in the cab there would be more interest in this type of vehicle with obvious advantages in manoeuvrability, loading 32 tons on four axles easily and no distribution problems, etc.

THE CONTINENTAL trend towards three-axle semi-trailers reminds me of an amusing occurrence in the early 1930s.

A foundry at Oxford engaged several local hauliers to deliver heavy castings to electricity stations all over the country, and these contractors collected return loads—usually wholesale foodstuffs. They all used 30 cwt Ford, Chevrolet or Bedford trucks, single rear wheels, converted to rigid six-wheelers with dead rear axles, and the laden weight was nobody's business!

One afternoon a Chevrolet, owned by Ernie arrived at the foundry to pick up a transformer. The truck had considerable overhang, and as the hoist gently laid the big transformer on the dropside body, the front wheels left the ground.

The driver telephoned Ernie. Should he refuse the load? No, wait. Ernie arrived with another lorry bearing a pair of Ford wheels, axle, and semi-elliptics, also a portable welding plant. The fourth axle was welded to the rear of the chassis, down came the transformer again, and the front wheels stayed put. Next day, this strange vehicle delivered. the load, and ran in this state for several weeks afterwards. Tyre scrub? Ernie had plenty of old tyres.

He later emigrated to South Africa, so, if you ever hear of an unusual hybrid vehicle in that country, Ernie probably engineered it! GEOFFREY YORKE, 68 Marquis Road, London NW1