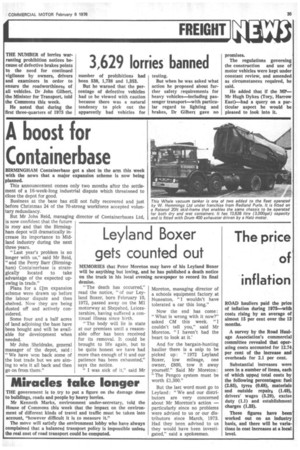 THE NUMBER of lorries warranting prohibition notices because of defective brakes points to the need for continued vigilance by owners, drivers and examiners in order to ensure the roadworthiness of all vehicles. Dr John Gilbert, the Minister for Transport, told the Commons this week.

But he warned that the percentage of defective vehicles had to be viewed with caution because there was a natural tendency to pick out the apparently bad vehicles for testing.

But when he was asked what action he proposed about further safety requirements for heavy vehicles—including passenger transport—with particular regard to lighting and brakes, Dr Gilbert gave no promises.

The regulations governing the construction and use of motor vehicles were kept under constant review, and amended as circumstances required, he said.

He added that if the MP— Mr Hugh Dykes (Tory, Harrow East)—had a query on a particular aspect he would be pleased to look into it.