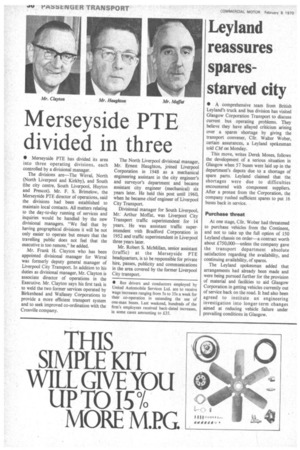 • Merseyside PTE has divided its area into three operating divisions, each controlled by a divisional manager.

The divisions are—The Wirral, North (North Liverpool and Kirkby), and South (the city centre, South Liverpool, Huyton and Prescot). Mr. F. S. Brimelow, the Merseyside PTE director of operations, said the divisions had been established to maintain local contacts. All matters relating to the day-to-day running of services and inquiries would be handled by the new divisional managers. "We feel that by having geographical divisions it will be not only easier to operate but ensure that the travelling public does not feel that the executive is too remote," he added.

Mr. Frank H. Clayton who has been appointed divisional manager for Wirral was formerly deputy general manager of Liverpool City Transport. In addition to his duties as divisional manager, Mr. Clayton is associate director of operations in the Executive. Mr. Clayton says his first task is to weld the two former services operated by Birkenhead and Wallasey Corporations to provide a more efficient transport system and to seek improved co-ordination with the Crosville company. The North Liverpool divisional manager, Mr. Ernest Haughton, joined Liverpool Corporation in 1948 as a mechanical engineering assistant in the city engineer's and surveyor's department and became assistant city engineer (mechanical) six years later. He held this post until 1960, when he became chief engineer of Liverpool City Transport.

Mr. Robert S. McMillan, senior assistant (traffic) at the Merseyside PTE headquarters, is to be responsible for private hire, passes, publicity and communications in the area covered by the former Liverpool City transport.