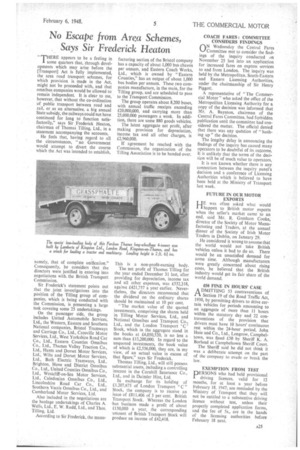 " THERE appears to be a feeling in some quarters that, through developments which may arise before the [Transport] Act is fully implemented, the area road transport schemes, for which provision is made in the Act, might not be proceeded with, and that omnibus companies would be allowed to remain independent. It is clear to me, however, that without the co-ordination of public transport between road and rail, or as an alternative, a big annual State subsidy, the railways could not have continued for long to function satisfactorily," says Sir Frederick Heaton, chairman of Thomas Tilling, Ltd., in a statement accompanying the accounts.

He feels that, having regard to all the circumstances, "no Government would attempt to divert the course which the Act was intended to establish, namely, that of complete unification." Consequently, he considers that the directors were justified in entering into negotiations withthe British Transport Commission.

Sir Frederick's statement points out that the joint investigations into the position of the Tilling group of companies, which is being conducted with the Commission, is presenting a large task covering some 25 undertakings.

Also included in the negotiations are the haulage undertakings of Charles A. Wells, Ltd., E. W. Rudd, Ltd., and Thos. Tilling, Ltd.

According to Sir Frederick, the mann

facturing section of the Bristol company has a capacity of about .1,000 bus chassis per annum, and Fastern Coach Works, Ltd., which is owned by "Eastern Counties," has an output of about 1,000 bus bodies per annum. These two companies manufacture, in the main, for the Tilling group, and are scheduled to pass to the Transport Commission.

The latest aggregate net profit, after making provision for depreciation, income tax and all other charges, is £2,960,000.

If agreement be reached with the Commission, the organization of the Tilling Association is to be handed over.

This is a non-profit-earning body.

The net profit of Thomas Tilling for the year ended December 31 last, after providing for depreciation, income tax and all other expenses, was £532,318, against £421,737 a year earlier. Nevertheless, the directors recommend that the dividend on the ordinary shares should be maintained at 10 per cent.

"The market value of the quoted investments, comprising the shares held in Tilling Motor Services, Ltd., and National Omnibus and Transport Co., Ltd., and the London Transport 'C' Stock, which in the aggregate stand in the books at £4,050,520, is no less a sum than £13,200,000. In regard to the unquoted investments, the book value of which is £2,556,000, they are, in my view, of an actual value in excess of that figure," says Sir Frederick.

Thomas Tilling, Ltd., will still possess substantial assets, including a controlling interest in the Cornhill Insurance Co., Ltd., and in Daimler Hire, Ltd.

In exchange for its holding of £1,207,675 of London Transport " C " Stock, the company is to receive an issue of £811,406 of 3 per cent. British Transport Stock. Whereas the London • bus business made a profit of about £150,000 a year, the corresponding amount of British Transport Stock will produce an income of £42,418. COACH FARES: COMMITTEE CONSIDERS FINDINGS

ON Wednesday the Central Fares Committee met to consider the findings of the inquiry conducted on November 25 last into an application for increased fares on express services to and from London. The inquiry was held by the Metropolitan, South-Eastern and Eastern Licensing Authorities, under the chairmanship of Sir Henry Piggott.

A representative of "The Commercial Motor" who asked the office of the Metropolitan Licensing Authority for a copy of the decision was informed that Mr. A. Baynton, chairman of the Central Fares Committee, had forbidden publication until the committee had considered the matter. The official denied that there was any question of "hushing up" the decision.

The lengthy delay in announcing the findings of the inquiry has caused many operators to be doubtful of its outcome. It is unlikely that the terms of the decision will be of much value to operators.

It is not known whether there is any connection between the inquiry panel's decision and a conference of Licensing Authorities which is believed to have been held at the Ministry of Transport last week.

FUTURE IN OUR MOTOR EXPORTS

HE was often asked what would happen to British motor exports when the seller's market came' to an end, said Mr. R. Gresham Cooke, director of the Society of Motor Manufacturing and Traders, at the annual dinner of the Society of Irish Motor Traders in Dublin, on January 29.

He Considered it wrong to assume that the world would not take British vehicles unless it had to do so. There would be an unsatisfied demand for some time. Although manufacturers were greatly concerned about rising costs, he believed that the British industry would get its fair share of the world demand.

IN FINE IN HOURS' CASE

A DMITTING 53 contraventions of .1-1. Section 19 of the Road Traffic Act, 1930, by permitting drivers to drive certain vehicles for periods amounting to an aggregate of more than 11 hours within the statutory day and 22 contraventions of the provision that drivers must have 10 hours' continuous rest within the 24-hour period, John Huie and Co., Ltd., Longrow, Campbeltown, was fined £50 by Sheriff K. A. Borland at Camp beitown Sheriff Court.

The Sheriff said he did not think it was a deliberate attempt on the part of the company to evade or break the law.

PERSONS who had held provisional driving licences, valid for 12 months, for at least a year before February 18, 1947; are rbminded by the Ministry of Transport that they will not be entitled to a substantive driving licence without test, unless their properly completed application forms, and the fee of 5s., are in the hands of the licensing authorities before February 18 next.