OUT ON ITS OWN 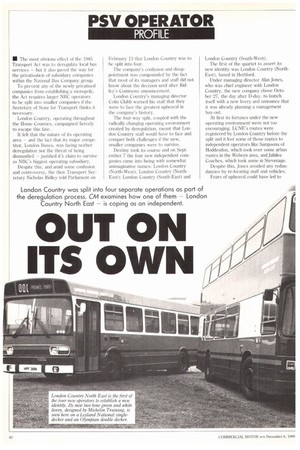 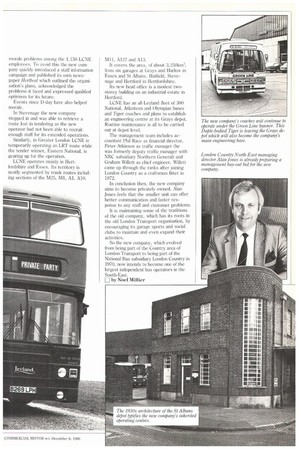 Page 54, 6th December 1986 — OUT ON ITS OWN
Close
Noticed an error?
If you've noticed an error in this article please click here to report it so we can fix it.
Keywords : London Country Bus Services, Hertford, National Bus Company, Buses In London, Arriva Shires & Essex, Privatisation Of London Bus Services

London Country was split into four separate operations as part of the deregulation process. CM examines how one of them — London Country North East — is coping as an independent.

• The most obvious effect of the 1985 Transport Act was to deregulate local bus services — but it also paved the way for the privatisation of subsidiary companies within the National Bus Company group.

To prevent any of the newly privatised companies from establishing a monopoly, the Act requires larger NBC operators to be split into smaller companies if the Secretary of State for Transport thinks it necessary.

London Country, operating throughout the Home Counties, campaigned fiercely to escape this fate.

It felt that the nature of its operating area — and the fact that its major competitor, London Buses, was facing neither deregulation nor the threat of being dismantled — justified its claim to survive as NBC's biggest operating subsidiary.

Despite this, and amid some confusion and controversy, the then Transport Secretary Nicholas Ridley told Parliament on February 13 that London Country was to he split into four.

The company's confusion and disappointment was compounded by the fact that most of its managers and staff did not know about the decision until after Ridley's Commons announcement.

London Country's managing director Colin Clubb warned his staff that they were to face the greatest upheaval in the company's history.

The four-way split, coupled with the radically changing operating environment created by deregulation, meant that London Country staff would have to face and conquer both challenges if the new, smaller companies were to survive.

The first of the quartet to assert its new identity was London Country (NorthEast), based in Hertford.

Under managing director Alan Jones, who was chief engineer with London Country, the new company chose October 27, the day after D-day, to launch itself with a new livery and announce that it was already planning a management buy-out.

At first its fortunes under the new operating environment were not too encouraging. LCNE's routes were registered by London Country before the split and it lost some of those routes to independent operators like Sampsons of Hoddesdon, which took over some urban routes in the Welwyn area, and Jubilee Coaches, which took some in Stevenage.

Despite this, Jones avoided any redundancies by re-locating staff and vehicles.

Fears of upheaval could have led to

morale problems among the 1,150 LCNE employees. To avoid this the new company quickly introduced a staff information campaign and published its own newspaper Hertbeat which outlined the organisation's plans, acknowledged the

problems it faced and expressed qualified optimism for its future.

In Stevenage the new company stepped in and was able to retrieve a route lost in tendering as the new operator had not been able to recruit enough staff for its extended operations.

Similarly, in Greater London LCNE is temporarily operating an LRT route while the tender winner, Eastern National. is gearing up for the operation.

LCNE operates mainly in Hertfordshire and Essex. Its territory is neatly segmented by trunk routes including sections of the M25, Ml, Al, A10, M11, A127 and A13.

It covers the area, of about 3,250km2, from six garages at Grays and Harlow in Essex and St Albans, Hatfield, Stevenage and Hertford in Hertfordshire.

Its new head office is a modest twostorey building on an industrial estate in Hertford.

LCNE has an all-Leyland fleet of 300 National, Atlantean and Olympian buses and Tiger coaches and plans to establish an engineering centre at its Grays depot. Routine maintenance is all to be carried out at depot level.

The management team includes accountant Phil Race as financial director, Peter Atkinson as traffic manager (he was formerly deputy traffic manager with NBC subsidiary Northern General) and Graham Willett as chief engineer. Willett came up through the ranks after joining London Country as a craftsman fitter in 1972.

In conclusion then, the new company aims to become privately owned. Alan Jones feels that the smaller unit can offer better communication and faster response to any staff and customer problems.

It is maintaining some of the traditions of the old company. which has its roots in the old London Transport organisation, by encouraging its garage sports and social clubs to maintain and even expand their activities.

So the new company, which evolved from being part of the Country area of London Transport to being part of the National Bus subsidiary London Country in 1970, now intends to become one of the largest independent bus operators in the South-East.