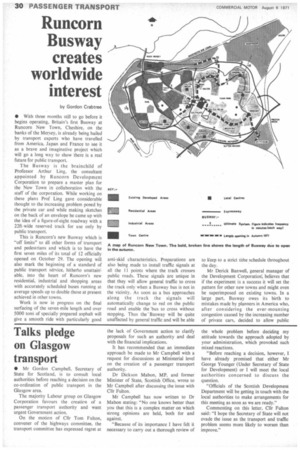 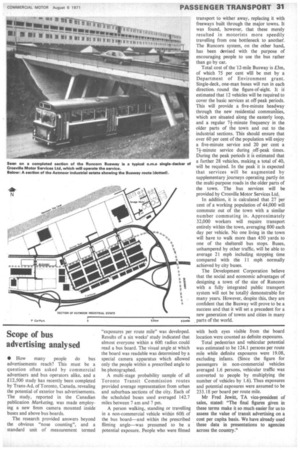 by Gordon Crabtree • With three months still to go before it begins operating. Britain's first Busway at Runcorn New Town, Cheshire, on the banks of the Mersey, is already being hailed by transport experts who have travelled from America, Japan and France to see it as a brave and imaginative project which will go a long way to show there is a real future for public transport.

The Busway is the brainchild of Professor Arthur Ling, the consultant appointed by Runcorn Development Corporation to prepare a master plan for the New Town in collaboration with the staff of the corporation. While working on these plans Prof Ling gave considerable thought to the increasing problem posed by the private car and while making sketches on the back of an envelope he came up with the idea of a figure-of-eight roadway with a 22ft-wide reserved track for use only by public transport.

This is Runcorn's new Busway which is "off limits" to all other forms of transport and pedestrians and which is to have the first seven miles of its total of 12 officially opened on October 29. The opening will also mark the beginning of a standard of public transport service. hitheeto unattainable. into the heart of Runcorn's new residential, industrial and shopping areas with accurately scheduled buses running at average speeds up to double those at present achieved in other towns.

Work is now in progress on the final surfacing of the seven-mile length and over 5000 tons of specially prepared asphalt will give a smooth ride with particularly good anti-skid characteristics. Preparations are also being made to install traffic signals at all the 11 points where the track crosses public roads. These signals are unique in that they will allow general traffic to cross the track only when a Busway bus is not in the vicinity. As soon as a bus approaches along the track the signals will automatically change to red on the public road and enable the 'bus to cross without stopping. Thus the 'Busway will be quite unaffected by general traffic and will be able to keep to a strict tithe schedule throughout the day.

Mr Derick Banwell, general manager of the Development Corporation, believes that if the experiment is a success it will set the pattern for other new towns and might even be superimposed on existing towns. In a large part. Busway owes its birth to mistakes made by planners in America who, after considering the ever-mounting congestion caused by the increasing number of private cars, decided to allow public transport to wither away, replacing it with freeways built through the major towns. It was found, however, that these merely resulted in motorists more speedily travelling from one bottleneck to another'. The Runcorn system, on the other hand, has been devised with the purpose of encouraging people to use the bus rather than go by car.

Total cost of the I2-mile Busway is £3m, of which 75 per cent will be met by a Department of Environment grant. Single-deck, one-man buses will run in each direction, round the figure-of-eight. It ig estimated that 12 vehicles will be required to cover the basic services at off-peak periods. This will provide a five-minute headway through the new residential communities, which are situated along the easterly loop, and a regular 7+-minute frequency in the older parts of the town and out to the industrial sections. This should ensure that over 60 per cent of the population will enjoy a five-minute service and 20 per cent a 74. minute service during ,off-peak times. During the peak periods it is estimated that a further 28 vehicles, making a total of 40, will be required. In the peak it is expected that services will be augmented by supplementary journeys operating partly on the multi-purpose roads in the older parts of the town. The bus services will be provided by Crosville Motor Services Ltd.

In addition, it is calculated that 27 per cent of a working population of 44,000 will commute out of the town with a similar number commuting in. Approximately 32,000 workers will require transport entirely within the town, averaging 800 each day per vehicle. No one living in the town will have to walk more than 450 yards to one of the sheltered bus stops. Buses, unhampered by other traffic, will be able to average 21 mph including stopping time compared with the 11 mph normally achieved by city buses.

The Development Corporation believe that the social and economic advantages of designing a town of the size of Runcorn with a fully integrated public transport system will not be totallY demonstrable for many years. However, despite this, they are confident that the Busway will prove to be a success and that it will set a precedent for a new generation of towns and cities in many