HIGHLANDS DEPEND ON ROADS 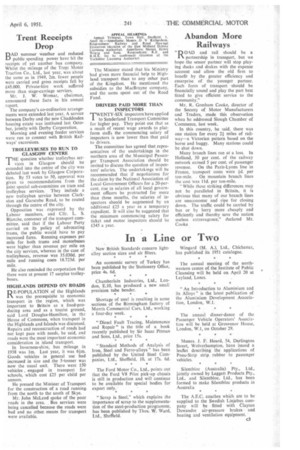 Page 41, 6th April 1951 — HIGHLANDS DEPEND ON ROADS
Close
Noticed an error?
If you've noticed an error in this article please click here to report it so we can fix it.
Keywords : Clan Fraser, Inverness, Skye, Ministry Of Transport, Transport, Great Britain Road Numbering Scheme

RE-POPULATION of the Highlands was the prerequisite to economic transport in the region, which was important to Britain as a food-producing area and as a tourist ground, said Lord Douglas-Hamilton, in the House of Commons, when transport in the Highlands and Islands was discussed. Repairs and reconstruction of roads had not kept pace with needs, he said, and roads were the most important economic consideration in island transport.

In Inverness-shire, bus mileage in 1938 was Im. Last year, it was 6im. Goods vehicles in general use had increased in size and the 5-tonner was now the usual unit. There were 150 vehicles . engaged in transport for schools, which cost £25 per child per annum.

He pressed the Minister of Transport for the construction of a road running. from the north to the south of Skye.

Mr. John McLeod spoke of the poor roads in the area.Bus services were being cancelled because the roads were bad and no other means for transport were available. The Minister stated that his Ministry had given more financial help to Highland transport than to any other part of the Kingdom. He mentioned the subsidies to the MacBrayne company, and the sums spent out of the Road Fund.