low the tests were carried out 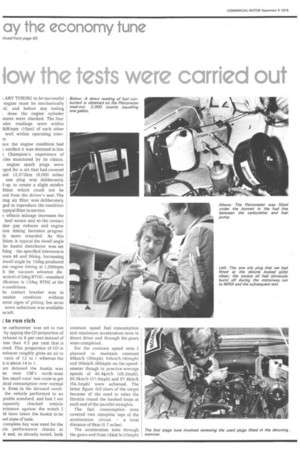 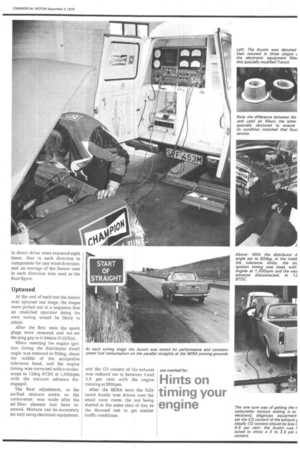 Page 64, 5th September 1975 — low the tests were carried out
Close
Noticed an error?
If you've noticed an error in this article please click here to report it so we can fix it.

L ANY TUNING to be successful engine must be mechanically ad, and before any testing done the engine cylinder ;sures were checked. The four ader readings were within lltN/sqm (10psi) of each other well within operating toler

rice the engine condition had verified it was detuned in line Champion's experience of cies monitored by its clinics.

engine spark plugs were aged for a set that had covered Ind 12,872km (8,000 miles) one plug was deliberately i-up to create a slight misfire Eton which could not be ced from the driver's seat. The ting air filter was deliberately ged to reproduce the condition typical filter in service.

3 vehicle mileage increases the heel wears and so the contact [ker gap reduces and engine don timing becomes progresly more retarded. As this Mon is typical the dwell angle he Austin distributor was set 5deg — the specified tolerance is veen 46 and 56deg. Increasing dwell angle by 10deg produced [sic engine timing at 1,000rpm h the vacuum advance disaected) of 2deg BTDC— standard dfication is 12deg BTDC at the e conditions.

he contact breaker was in onable condition without arent signs of pitting, but as no worn substitute was available as left.

t to run rich ie carburetter was set to run by upping the CO proportion of exhaust to 8 per cent instead of less than 4.5 per cent that is tired, This proportion of CO in exhaust roughly gives an air to ratio of 12 to 1 whereas the n is about 14 to 1.

ace detuned the Austin was en over CM' s north-west Ion small vans' test route to get aical consumption over normal Ls. Even in the detuned condithe vehicle performed to an ptable standard, and had I not equently checked vehicle ormance against the watch I • Id have taken. the Austin to be )od state of tune.

complete day was used for the cle performance checks at A and,as already stated, both constant speed fuel consumption and maximum acceleration tests in direct drive and through the gears were completed.

The acceleration tests through the gears and from 16km'h(10mph) in direct drive were repeated eight times, four in each direction to compensate for any wind direction, and an average of the fastest time in each direction was used as the final figure.

UptUried At the end of each test the Austin was uptuned one stage; the stages were picked out in a sequence that an unskilled operator doing his own tuning would be likely to adopt.

When resetting the engine ignition timing the distributor .dwell angle was restored to 50deg, about the middle of the acceptable tolerance band, and the engine timing was corrected with a stroboscope to 12deg 13TDC at 1,000rpm with the vacuum advance disengaged.

The final adjustment, to the air/fuel mixture screw on the carburetter, was made after the air-filter element had been renewed. Mixture can be accurately set only using electronic equipment, and the CO content of the exhaust was reduced too to between 3 and 3.5 per cent with the engine running at 850rpm.

After the MIRA tests the fully tuned Austin was driven over the small vans' route, the test being started at the same time of day as the detuned test to get similar traffic conditions,