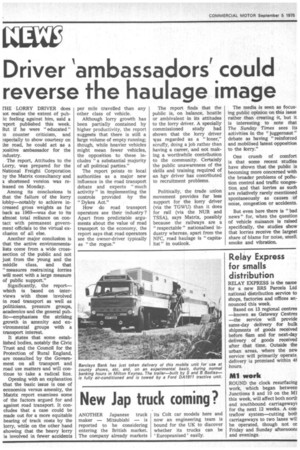 Page 6, 5th September 1975 — Driver 'ambassadors' could reverse the haulage image
Close
Noticed an error?
If you've noticed an error in this article please click here to report it so we can fix it.
Keywords : Truck, Lorry, Haulage, Semi-trailer Truck, Traffic Congestion, Motoring Taxation In The United Kingdom, Executive Agencies Of The United Kingdom Government

HE LORRY DRIVER does tot realise the extent of pubic feeling against him, said a aport published this week. But if he were " educated " to counter criticism, and ;specially to show courtesy on the road, he could act as a ositive ambassador for the industry.

The report, Attitudes to the Lorry, was prepared for the National Freight Corporation ay the Matrix consultancy and a shortened version was released on Monday.

Among its conclusions is that the failure of the lorry Lobby—notably to achieve increased gross weights as far back as 1969—was due to its almost total reliance on contact With permanent government 'officials to the virtual exclusion of all else.

Another major conclusion is that the active environmentalists come from a wide crosssection of the public and not just from the young and the middle class, and that "measures restraining lorries will meet with a large measure of public support."

Significantly, the report— which is based on interviews with those involved in road transport as well as politietialas, pressure groups, academics land the general public—emphasises the striking growth in amenity and environmental groups with a transport interest.

It states that some established bodies, notably the Civic Trust and the Council for the Proteetion of Rural England, are consulted by the Government on all transport and road use matters and will continue to take a radical line.

Opening with an explanation that the basic issue is one of economics versus amenity, the Matrix report examines some of the factors argued for and against read transport. It concludes that a case could be made out for a more equitable bearing of track casts by the lorry, while on the other hand showing that the heavy lorry is involved in fewer accidents per mile travelled than any other class of vehicle.

Although lorry growth has been partially contained by higher productivity, the report suggests that there is still a large volume of empty running; though, while heavier vehicles might mean fewer vehicles, the opposition to these includes "a substantial majority of all political parties."

The report points to local authorities as a major new influence in the road transport debate and expects "much activity" in implementing the controls provided by the "Dykes Act."

How do road transport operators see their 'industry? Apart from predictable arguments about the value of road transport to the economy, the report says that road operators see the owner-driver typically as "the rogue." The report finds that the public is, on balance, hostile or ambivalent in its attitudes to 'the lorry driver. A specially commissioned study had shown that the lorry driver was regarded as a "loner," scruffy, doing a job rather than having a career, and not making a worthwhile contribution to the community. Certainly the public unawareness of the skills and training required of an hgv driver has contributed to recruitment problems.

Politically, the trade union movement provides far less support for the lorry driver (via the TGWU) than it does for rail (via the NUR and TSSA), says Matrix, possibly because the railways are a " respettable " nationalised -industry whereas, apart from the NFC, road 'haulage is " capitalist " in outlook. The media is seen as focusing public opinion on this issue rather than creating it, but it is interesting to note that The Sunday -Times sees its activities in the " juggernaut " debate as having "reinforced and mobilised latent opposition to the lorry."

One crumb of comfort is that some recent studies have shown that the public is becoming more concerned with the broader problems of pollution control and traffic congestion and that lorries as such are relatively rarely mentioned spontaneously as 'causes of noise, congestion or accidents.

But even here there is "bad news" for, When the question of vehicle nuisance is raised specifically, the studies show that lorries receive the largest share of blame for noise, smell, smoke and vibration.