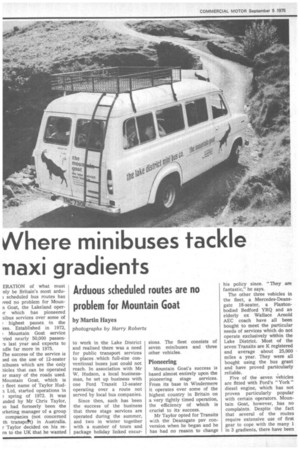 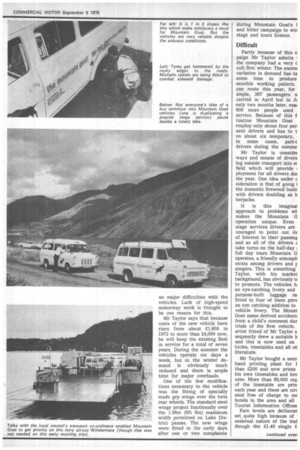 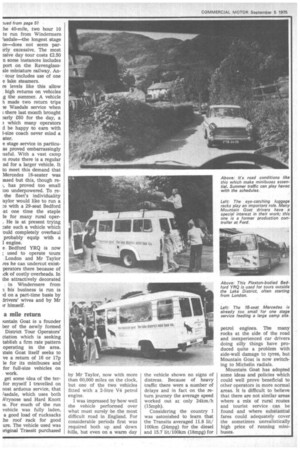 Page 52, 5th September 1975 — Where minibuses tackle inaxi gradients
Close
Noticed an error?
If you've noticed an error in this article please click here to report it so we can fix it.
Keywords : Mountain Goat, Minibus, Bus

Arduous scheduled routes are no problem for Mountain Goat

photographs by Harry Roberts ERATION of what must ely be Britain's most ardu; scheduled bus routes has ived no problem for Mounn Goat, the Lakeland operawhich has pioneered aibus services over some of highest passes. in the Kes. Established in 1972, Mountain Goat service Tied nearly 50,000 passen7s last year and expeCts to :idle far more in 1975.

Fhe success of the service is sed on the use of 12-seater nibuses which are the only aides that can be operated er many of the roads used. Mountain Goat, which is fleet name of Taylor Hilda Ltd, 'started operations in spring of 1972, Pt was inded by Mr Chris Taylor, io had formerly been the irketing manager of a group companies (not concerned th transpollt) in Australia. r Taylor decided on his rem to the UK that he wanted to work in the Lake District and realised there was a need for public transport services to places .which full-size conventional buses just could not reach. In association with Mr W. Hudson, •a local businessman, he set up business with • one Ford Transit 12-seater operating over a route not served by local bus companies.

Since then, such has been the success of the business that three stage services are operated during the summer, and two in winter together with a number of tours and package holiday linked excur sions. The fleet consists of seven minibuses and three other vehicles.

Mountain Goat's success is based almost entirely upon the pioneering stage services. From its base in Windermere it operates over some of the highest country in Britain on a very tightly timed operation, the efficiency of which is crucial to its success.

Mr Taylor opted for Transits with the Dean sgate psv conversion when he began and he has had no reason to change his policy .since. "They are fantastic," he says.

The other three vehicles in the fleet, a Mercedes-Deansgate 18-seater, a Plaxtonbodied Bedford YRQ and an elderly ex Wallace Arnold AEC coach have all been bought to meet the particular needs of services which do not operate exclusively within the Lake District. Most of the seven Transits are K registered and average about 25,000 miles a year. They were all bought using the bus grant and have proved particularly reliable.

Five of the seven vehicles are fitted with Ford's " York " diesel engine, which has not proven particularly popular with certain operators. Mountain Goat, however, has no complaints. Despite the fact that several of the routes require extensive use of first gear to cope with the many 1 in 3 gradients, there have been no major difficulties with the vehicles. Lack of high-speed motorway work is thought to be one reason for this.

Mr Taylor says that because costs of the new vehicle have risen from about £1,800 in 1972 to more than £4,000 now, he will keep the existing fleet in service for a total of seven years. During the summer the vehicles operate six days a week, but in the winter demand is obviously much reduced and there is ample time for major overhauls.

One of the few modifications necessary to the vehicle was the fitting of specially made grp wings over the twin rear wheels. The standard steel wings project fractionally over the 1.98m (6ft 6in) maximum width permitted on Lake District passes. The new Wings were fitted in the early days after one or two complaints during Mountain Goat's 1 and bitter campaign to wir stage and tours licence.

Partly because of !this c . paign Mr Taylor admits the company had a very cult first winter. The enorm variation in demand has ta some time to produce sensible working pattern. one route this year, for ample, 267 passengers carried in April but in Jt only two months later, exai 800 more people used service. Because of this f tuation Mountain Goat employ only about four pen nent drivers and •has to t on about six temporary, in some cases, part-t drivers during the summe Mr Taylor is considei ways and means of divers ing outside transport into Sc field which will provide 1 ployment for all drivers dui the year. One idea under c sideration is that of going i the domestic firewood busk with drivers doubling as ii berjacks.

It is this imaginal approach to problems wl makes the Mountain G operation unique. Even stage services drivers are couraged to 'point out itE of interest to their passeng and as all of the drivers s take turns on the half-day full day tours Mountain G operates, a friendly atmosph exists among drivers and r sengers. This is something Taylor, with his market background, has obviously ti to promote. The vehicles hi an eye-catching livery and purpose-built luggage ra fitted to four of them prov an eye catching addition to vehicle livery. The Mount Goat name derived accident from a child's comment dur trials of the first vehicle. artist friend of Mr Taylor s sequently drew a suitable 11 and this is now used on hides, timetables and all of literature.

Mr Taylor bought a seco hand printing plant for 1 than £200 and now prints his own timetables and bro urea. More than 60,000 cop of the timetable are print each year and these are circ ated free of charge to ms hotels in the area and all Tourist Information Offices Fare levels are deliberat set quite high because of • seasonal nature of the traf though the £1.40 fsingle f, he 40-mile, two hour 10 te run from Windermere rasdale—the longest Stage ce—does not seem parirly excessive, The most asive day tour costs £2.50 n some instances includes port on the Ravenglassale miniature railway. An • tour includes use of one e lake Steamers.

re levels Like this allow high returns on vehicles g the :summer. A vehicle h made two return trips ie Wasdale service when There last month brought arly £60 for the day, a ?. which many operators d be happy to earn with l-size coach never mind a ater.

e Stage service in particuas proved embarrassingly ssful. With a vast camp !n, route there is a regular nd for a larger vehicle. It to meet this demand that Mercedes 18-seater was lased but this, though re!, has proved too small boo underpowered. To rethe fleet's individuality tylor would like to run a with a 29-seat Bedford at one time the staple le for many rural oper. He is at present trying zate such a vehicle which ould completely overhaul probably equip with a I engine.

e Bedford YRQ is now ; used to operate tours London and Mr Taylor les he can undercut existperators there because of .ck of costly overheads. In the attractively decorated in Windermere from a his business is run is si on a part-time basis by drivers' wives and by Mr ir himself.

kuntain Goat is a founder ber of the newly formed District Tour Operators' ciation which is seeking tablish a firm rate pattern operating in the area. Alain Goat itself seeks to ye a return of 16 or 17p to for its minibuses and for full-size vehicles. on work.

get some idea of the terfor myself I 'travelled on nost arduous service, that (asdale, which uses both Nrynose and Hard Knott s. For much of the run vehicle was fully laden, a good load of rucksacks he roof rack for good are. The vehicle used was riginal Tramit purchased by Mr Taylor, now with more than 60,000 miles on the clock, but one of the two vehicles fitted with a 2-litre V4 petrol engine.

I was impressed by how well the vehicle performed over what must surely be the most difficult road in England. For considerable periods first was required both up •and down bills, but even on a warm day the vehicle shown no signs of distress. Because of heavy traffic there were a number of delays and in fact on the return journey the average speed worked out at only 24km/h (15mph).

Considering the country I was ,astonished to learn that the Transits averaged 11.8 lit/ 100km (24mpg) for the diesel and 15.7 lit/100km (18mpg) for petrol engines. The many rocks at the side of the road and inexperienced car drivers doing silly things have produced quite a problem with side-wall damage to tyres, but Mountain Goat is now switching to Michelin radials.

Mountain Goat has adopted some ideas and policies Which could well prove beneficial to other operators in more normal areas. It is difficult to believe that there are not similar areas where a mix of rural routes and tourist service can be found and where substantial fares could adequately cover the sometimes unrealistically high price of running minibuses.