Q We operate a recovery X service and have a Scania 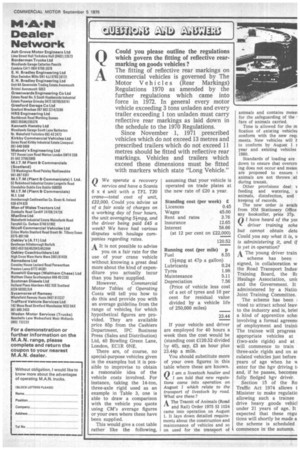 Page 51, 5th September 1975 — Q We operate a recovery X service and have a Scania
Close
Noticed an error?
If you've noticed an error in this article please click here to report it so we can fix it.

6 x 4 unit with a TFL T20 crane—total cost of unit, £22,000. Could you advise us of a fair scale of charges on a working day of four hours, the unit averaging 5,impg, and the driver being paid £45 a week? We have had various disputes with haulage cornpan/es regarding rates.

It is not possible to advise you on a fair rate for the use of your crane vehicle without knowing a great deal more about the kind of expenditure you actually incur than you have supplied.

However, Commercial Motor Tables of Operating Costs will tell you how to do this and provide you with an average guideline from the range of vehicles_ for which hypothetical figures are provided. They are available price 85p from the Cashiers Department, IPC Business Press (Sales and Distribution) Ltd, 40 Bowling Green Lane, London, EC1R ONE.

There are, of course, no special-purpose vehicles given in the examples but it is possible to improvise to obtain a reasonable idea of the vehicle costs involved. For instance, taking the 14-ton, three-axle rigid used as an example in Table 3, one is able to draw a comparison with the vehicle you quote using CM's average figures or your own where these have been supplied.

This would give a cost table rather like the following, assuming that your vehicle is operated on trade plates at the new rate of £20 a year.

You should substitute more of your own figures in this table where these are known.

QI am a livestock haulier and I am told that new regulations came into operation on August 1 which relate to the transport of livestock by road. What are these ?

A The Transit of Animals (Road

and Rail) Order 1975 SI 1024 came into operation on August 1. It lays down detailed requirements about the construction and maintenance of vehicles and so on used for the transport of animals and contains meast for the safeguarding of the , fare of animals carried.

Time is allowed for the m fication of existing vehicles conform with the new reep. ments. New vehicles will I to conform by August I r year and existing vehicles 1980, Standards of loading are down to ensure that overcro ing does not occur and mean are proposed to ensure animals are not thrown at during transit.

Other provisions deal v feeding and watering, u animals, disinfection, and keeping of records.

The new order is avails from HM Stationery Office any bookseller, price 3'7p. of have heard of the yoz X driver training sche but cannot obtain deta Could you say what it is, u is administering it, and if is yet in operation? A The young driver train scheme has been signed, in collaboration w the Road Transport Indusi Training Board, the Rt Haulage Association, unit and the Government. It administered by a Nat/o: Joint Training Committee.

The scheme has been vised to attract school leav, to the industry and is, brie] a kind of apprentice scheJ involving a formal agreenu of employment and trainii The trainee will progress appropriate vehicles at (two-axle rigids) and at will commence to train three-axle rigids and on ax culated vehicles just before years of age when he v. enter for the hgv driving ti and, if he passes, becomes fully fledged hgv driver.

Section 15 of the Ro Traffic Act 1974 allows t Minister to make regulatio allowing such a trainee drive heavy goods vehici under 21 years of age. It expected that these regu tions will shortly be made a the scheme is scheduled commence in the autumn.