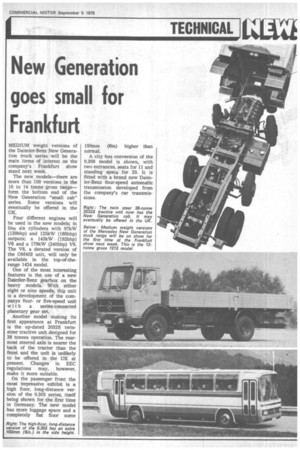 Page 29, 5th September 1975 — New Generation goes small for Frankfurt
Close
Noticed an error?
If you've noticed an error in this article please click here to report it so we can fix it.

MEDIUM weight versions of the Daimler-Benz New Generation truck series will be the main items of interest on the company's Frankfurt show stand next week.

The new models—there are more than 100 versions in the 10 to 14 tonne gross range— form the bottom end of the New Generation "small cab" series. Some versions will eventually be offered in the UK.

One of the most interesting features is the use of a new Daimler-Benz gearbox on the heavy models. With either eight or nine speeds, this unit is a development of the cornpanys fouror five-speed unit with a series-connected planetary gear set.

Another model making its first appearance at Frankfurt is the up-dated 2032S twinsteer tractive unit designed for 38 tonnes operation. The rearmost steered axle is nearer the back of the tractor than the front 'and the unit is unlikely to be offered in the UK at present. Changes in EEC regulations may, however, make it more suitable.

On the passenger front the most impressive exhibit is a high floor, long-distance version of the 0.303 series, itself being shown for the first time in Germany. The new model has more luggage space and a completely flat floor some 150mm (6in) higher than normal.

A city bus conversion of the 0.309 model is shown, with two entrances, seats for 11 and standing space for 29. It is fitted with a brand new Daimler-Benz four-speed automatic transmission developed from the company's car transmissions.