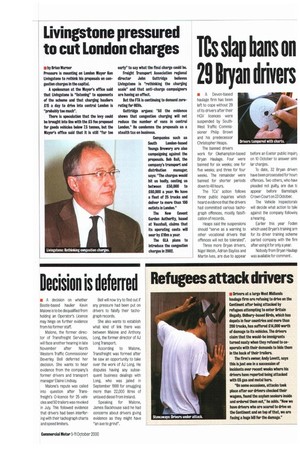 Pressure is mounting on London Mayor Ken Livingstone to rethink his proposals on congestion charges in the capital.

A spokesman at the Mayor's office said that Livingstone is "listening" to opponents of the scheme and that charging hauliers £15 a day to drive into central London is "probably too much".

There is speculation that the levy could be brought into line with the £5 fee proposed for goods vehicles below 7.5 tonnes, but the Mayor's office said that it is still "far too early" to say what the final charge could be.

Freight Transport Association regional director John Guttridge believes Livingstone is "rethinking the charging scale" and that anti-charge campaigners are having an effect.

But the AA is continuing to demand zerorating for HGVs.

Guttridge argues: "All the evidence shows that congestion charging will not reduce the number of vans in central London." He condemns the proposals as a stealth tax on business.

Companies such as South London-based Youngs Brewery are also campaigning against the proposals. Bob Ball, the company's transport and distribution manageg says: "The charges would hit us badly, costing us between £50,000 to £60.000 a year. We have a fleet of 25 trucks and deliver to more than 100 outlets in London."

The New Covent Garden Authority, based at Vauxhall, claims that its operating costs will soar by £10m a year.

The CIA plans to introduce the congestion charges In 2002.