A Light-van Section of the Commercial Motor Users Association. 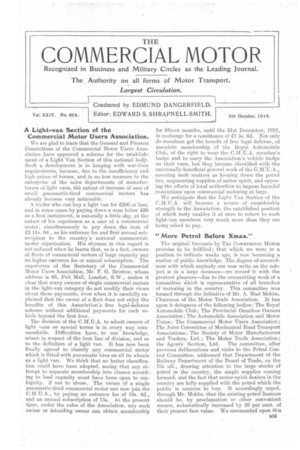 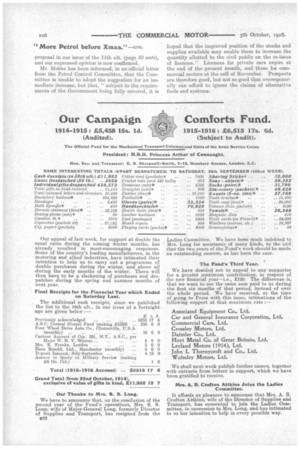 Page 1, 5th October 1916 — A Light-van Section of the Commercial Motor Users Association.
Close
Noticed an error?
If you've noticed an error in this article please click here to report it so we can fix it.
Keywords : Car Manufacturers, Van, Ford Motor Company

We are glad to learn that the General and Finance Committees of the Commercial Motor Users Aesociation have approved a scheme for the establishment of a Light Van Section of this national body. Such a development is in keeping with war-time requirements, because, due to the insufficiency and high prices of horses, and in no less measure to the enterprise of the sales departments of manufacturers of light vans, the extent of increase of user of small pneumatic-tired commercial motors hae already become very noticeable.

A trader who can buy a light van for £200 or less, and in some cases by Paying down a slim below £30 as a first instalment, is naturally a little shy, at the outset of his experience as a user of a commercial motor, simultaneously to pay down the sum of lls. fid., as his-entrance fee and first annual subscription to the country's national commercialmotor organization. His shyness in this regard is not reduced when he learns that, as is a fact, owners of fleets of commercial motors of large capacity pay no higher entrance fee or annual subscription. The experience of the Secretary of the Commercial Motor Users Association, Mr. F. G. Bristow, whose address is 83, Pall Mall, London, S.W., makes it clear that many owners of single commercial motors in the light-van category do not modify their views about these payments, even when it is carefully explained that the owner of a fleet does not enjoy the benefits of this Association's free legal-defence scheme without additional payments for each vehicle beyond the first four.

The decision of the C.M.U.A. to admit owners of light vans on special terms is in every way commendable. Difficulties have, to our knowledge, arisen in respect of the best line of division, and as to the definition of a light van. It has now been finally agreed to 'classify any commercial motor which is fitted with pneumatic tires on all its wheels as a light van. We think that no better classification could have been adopted, seeing that any attempt to separate membership into classes aceording to load capacity must have been open to ambiguity, if not to abuse. The owner of a single pneumatic-tired commercial motor can now join the C.M.U.A., by paying an entrance fee of 10s. Od., and an annual subscription of 15s. At the present time, under the rules of the Association, any such owner or intending owner can obtain membership for fifteen months, until the 31st December, 1917, in exchange for a remittance of £1 5s. 6d. Not only do members get the benefit of free legal defense, of associate membership of the Royal Automobile Club, of the right to wear the C.M.U.A. member's badge and to carry the Association's vehicle badge on their vans, but they become identified with the universally-beneficial general work of the G.IIVU.A., covering such matters as keeping down the petrol tax, augmenting supplies of motor spirit, and opposing the efforts of local authorities to impose harmful restrictions upon commercial motoring at large.

We anticipate that the Light Van Section of the C.M.U.A. will become a source of considerable strength to the Association, the established position of which body enables it at once to return to such light-van members very much more than they are being asked to pay.

The original forecasts by Tee COMMERCIAL MOTOR promise to be fulfilled ; that which we were in a position to indicate weeks ago, is now becoming a matter of public knowledge. The degree of..assuredIlOSS with which anybody can now write on the subject is in a large measure—we recordit with the greatest pleasure—due to the unremitting work of a committee e4ich is representative of all branches of Motoring in the country. This committee was formed through the initiative of Mr. A. Noel Mobbs, Chairman of the Motor Trade Association. It has upon it delegates of the following bodies: The Royal Automobile Club ; The Provincial Omnibus Owners Association ; The Automobile Association and Motor Union; The Commercial Motor Users Association; The Joint Committee of Mechanical Road Transport Associations; The Society of Motor Manufacturers and Traders,Ltd. ; The Motor Trade Association; the Agents' Section, Ltd. The committee, after previous deliberations and visits to the Petrol Control Committee, addressed that Department of the Railway Department of the Board of Trade, on the 7th ult., drawing attention to the large stocks of petrol in the country, the ample supplies coming forward, and the _fact that motor-spirit dealers in the country are fully supplied with the petrol which the public is anxious to buy. It aCcordingly urged, through Mr. Mobbs, that the existing petrol licences should be, by proclamation or other convenient means, automatically increased by 50 per cent. of their present face value. We commented upon this proposal in our issue of the 14th ult. (page 50 ante), and our expressed opinion is, now confirmed.

Mr. Moblas has been informed, in an official letter from the Petrol Control Committee, that the Committee is unable to adopt the suggestion for an immediate increase, but that, " subiect to the requirements of the Government being fully covered, it is hoped that the improved position of the stocks and supplies available may enable them to increase the quantity allotted to the civil public on the re-issue of licences." Licences for private oars expire at the end of the present month, and those for commercial motors at the eed of November. Prospects are therefore good, but not so good that ugers3generally can ,afford to ignore the claims of alternative fuels and systems.