Task force for Scotland tip for the future 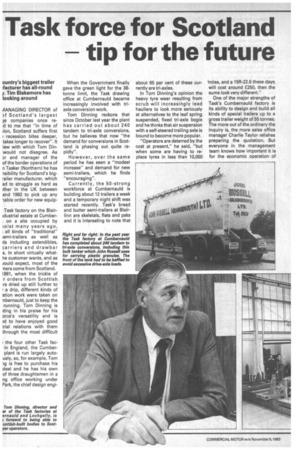 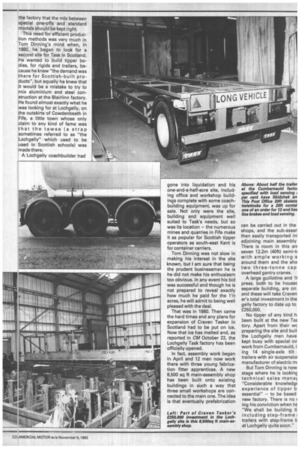 Page 60, 5th November 1983 — Task force for Scotland tip for the future
Close
Noticed an error?
If you've noticed an error in this article please click here to report it so we can fix it.
Keywords : Lochgelly, Cumbernauld, Cowdenbeath, Tawse, Trailer, Semi-trailer Truck, Film Trailer

ountry's biggest trailer rfacturer has all-round or. Tim Blakemore has looking around

VlANAGING DIRECTOR of af Scotland's largest le companies once red to me that "in time of ;ion, Scotland suffers first ; recession bites deeper, takes longer to recover". It iew with which Tom Dinwould not disagree. As ir and manager of the of the border operations of n Tasker (Northern) he has risibility for Scotland's bigrailer manufacturer, which ad to struggle as hard as ither in the UK between and 1982 to pick up any iable order for new equip

Task factory on the Blairidustrial estate at Cumber, on a site occupied by loist many years ago, . all kinds of "traditional" ;emi-trailers as well as Is including extendibles, carriers and drawbar s. In short virtually whathe customer wants, and as iould expect, most of the -tiers come from Scotland. 1981, when the trickle of r orders from Scottish rrs dried up still further to a drip, different kinds of ation work were taken on nbernauld, just to keep the running. Tom Dinning is iting in his praise for his orce's versatility and is )d to have enjoyed good trial relations with them through the most difficult

r the four other Task facin England, the Cumberplant is run largely autously, so, for example, Tom ig is free to purchase his steel and he has his own of three draughtsmen in a ng office working under Park, the chief design engi When the Government finally gave the green light for the 38tonne limit, the Task drawing office at Cumbernauld became increasingly involved with triaxle conversion work.

Tom Dinning reckons that since October last year the plant has carried out about 240 tandem to tri-axle conversions, but he believes that now "the demand for conversions in Scotland is phasing out quite ra pidly".

However, over the same

period he has seen a "modest increase" and demand for new .semi-trailers, which he finds "encouraging".

Currently, the 50-strong workforce at Cumbernauld is building about 12 trailers a week and a temporary night shift was started recently. Task's bread and butter semi-trailers at Blair linn are skeletals, flats and psks and it is interesting to note that about 65 per cent of these currently are tri-axles.

In Torn Dinning's opinion the heavy tyre wear resulting from scrub will increasingly lead hauliers to look more seriously at alternatives to the leaf spring suspended, fixed tri-axle bogie and he thinks that air suspension with a self-steered trailing axle is bound to become more popular.

"Operators are deterred by the cost at present," he said, "but when some are having to replace tyres in less than 10,000 'miles, and a 15R-22.5 these days will cost around E250, then the sums look very different."

One of the major strengths of Task's Cumbernauld factory is its ability to design and build all kinds of special trailers up to a gross trailer weight of 55 tonnes. The more out of the ordinary the inquiry is, the more sales office manager Charlie Taylor relishes preparing the quotation. But everyone in the management team knows how important it is for the economic operation of the factory that the mix between special one-offs and standard models should be kept right.

This need for efficient produc.tion methods was very much in Tom Dinning's mind when, in 1980, he began to look for a second site for Task in Scotland. He wanted to build tipper bodies, for rigids and trailers, because he knew "the demand was there for Scottish-built products", but equally he knew that it would be a mistake to try to mix aluminium and steel construction at the Blair!inn factory. He found almost exactly what he was looking for at Lochgelly, on the outskirts of Cowdenbeath in Fife, a little town whose only claim to any kind of fame was that the tawse (a strap sometimes referred to as "the Lochgelly" which used to be used in Scottish schools) was made there.

A Lochgelly coachbuilder had gone into liquidation and his one-and-a-half-acre site, including office and workshop buildings complete with some coachbuilding equipment, was up for sale. Not only were the site, building and equipment well suited to Task's needs, but so was its location — the numerous mines and quarries in Fife make it as popular for Scottish tipper operators as south-east Kent is for container carriers.

Torn Dinning was not slow in making his interest in the site known, but I am sure that being the prudent businessman he is he did not make his enthusiasm too obvious. In any event his bid was successful and though he is not prepared to reveal exactly how much he paid for the 11/2 acres, he will admit to being well pleased with the deal.

That was in 1980. Then came the hard times and any plans for expansion of Craven Tasker in Scotland had to be put on ice. Now that ice has melted and, as reported in CM October 22, the Lochgelly Task factory has been officially opened.

In fact, assembly work began in April and 12 men now work there with three young fabrication fitter apprentices. A new 8,500 sq ft main-assembly shop has been built onto existing buildings in such a way that three small workshops are connected to the main one. The idea is that eventually prefabrication can be carried out in the shops, and the sub-assen then easily transported ml adjoining main assembly There is room in this ar( seven 12.2m (40ft) semi-ti with ample working s around them and the sho two three-tonne cap overhead gantry cranes.

A large guillotine and 11 press, both to be housec separate building, are on and these will take Craven er's total investment in the gelly factory to date up to £250,000.

No tipper of any kind h been built at the new ME tory. Apart from their wc preparing the site and buil the Lochgelly men have kept busy with special ov work from Cumbernauld, i ing 14 single-axle tilt trailers with air suspensior manufacturer of electric ml But Tom Dinning is now stage where he is looking technical sales manac "Considerable knowledgc experience of tipper b essential" — to be based new factory. There is no ing his conviction when hE "We shall be building ti including step-frame : trailers with step-frame h at Lochgelly quite soon."