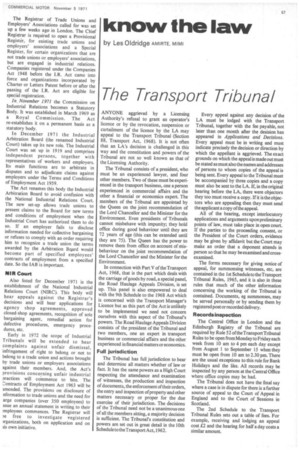 Page 59, 5th November 1971 — know the law
Close
Noticed an error?
If you've noticed an error in this article please click here to report it so we can fix it.

ANYONE aggrieved by a Licensing Authority's refusal to grant an operator's licence or by the revocation, suspension or curtailment of the licence by the LA may appeal to the Transport Tribunal (Section 88, Transport Act, 1968). It is not often that an LA's decision is challenged in this way and the constitution and powers of the Tribunal are not so well known as that of the Licensing Authority.

In connection with Part V of the Transport Act, 1968, that is the part which deals with the carriage of goods by road, a special panel, the Road Haulage Appeals Division, is set up. This panel is also empowered to deal with the 9th Schedule to the 1968 Act which is concerned with the Transport Manager's Licence but as this part of the Act is unlikely to be implemented we need not concern ourselves with this aspect of the Tribunal's powers. The Road Haulage Appeals Division consists of the president of the Tribunal and two members, one an expert in transport business or commercial affairs and the other experienced in financial matters or economics.

Full jurisdiction The Tribunal has full jurisdiction to hear and determine all matters whether of law or fact. It has the same powers as a High Court respecting the attendance and examination of witnesses, the production and inspection of documents, the enforcement oftheir orders, the entry and inspection of property and other matters necessary or proper for the due exercise of their jurisdiction. The decisions of the Tribunal need not be a unanimous one of all the members sitting, a majority decision is sufficient. The Tribunal's constitution and powers are set out in great detail in the 10th Schedule to the Transport Act, 1962.

Every appeal against any decision of the LA must be lodged with the Transport Tribunal, together with the fee payable, not later than one month after the desision has appeared in Applications and Decisions. Every appeal must be in writing and must indicate precisely the decision or direction by which the appellant is aggrieved. The exact grounds on which the appeal is made out must be stated as must also the names and addresses of persons to whom copies of the appeal is being sent. Every appeal to the Tribunal must be accompanied by three copies and a copy must also be sent to the LA. If, in the original hearing before the LA, there were objectors they too must receive a copy. If it isthe objectors who are appealing then they must send the applicant a copy of the appeal.

All of the hearing, except interlocutory applications and arguments upon preliminary points of law, must take place in open court. If the parties to the proceeding consent, or the President of the Court orders, evidence may be given by affidavit but the Court may make an order that a deponent attends in person so that he may be examined and crossexamined.

The forms necessary for giving notice of appeal, for summonsing witnesses, etc, are contained in the 1st Schedule to the Transport Tribunal Rules, 1965, and it is also in these rules that much of the other information concerning the working of the Tribunal is contained. Documents, eg summonses, may be served personally or by sending them by registered post or recorded delivery.

Records inspection The Central Office in London and the Edinburgh Registry of the Tribunal are required by Rule 52 of the Transport Tribunal Rules to be open from Monday to Friday each week from 10 am to 4 pm each day except from August I to September 15 when they must be open from 10 am to 2.30 pm. There are the usual exceptions to this rule for Bank Holidays and the like. All records may be inspected by any person at the Central Office where office copies may be had.

The Tribunal does not have the final say where a case is in dispute for there is a further source of appeal to the Court of Appeal in England and to the Court of Sessions in Scotland.

The 2nd Schedule to the Transport Tribunal Rules sets out a table of fees. For example, receiving and lodging an appeal cost £2 and the hearing for half a day costs a similar amount.