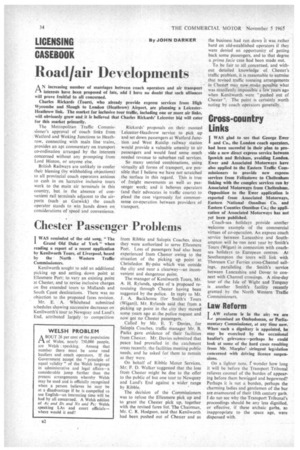 Page 36, 5th November 1965 — Law Reform
Close
Noticed an error?
If you've noticed an error in this article please click here to report it so we can fix it.

AW reform is in the air; we are promised an Ombudsman, or Parliamentary Commissioner, at any time now. When such a dignitary is appointed, he may be exercised by the occasional haulier's grievance—perhaps he could look at some of the hard cases resulting from Mr. Marples' stringent legislation concerned with driving licence suspensions.

On a lighter note. I. wonder how long it will be before the Transport Tribunal relieves counsel of the burden of appearing before them bewigged and begowned? Perhaps it is not a burden, perhaps the charming ladies and gentlemen of the bar are enamoured of their 18th century garb. I do not see why the Transport Tribunal's proceedings should be any less dignified, or effective, if these archaic garbs, so inappropriate to the space age, were dispensed with.