WHEELS of INDUSTRY " The wheels of wealth will be 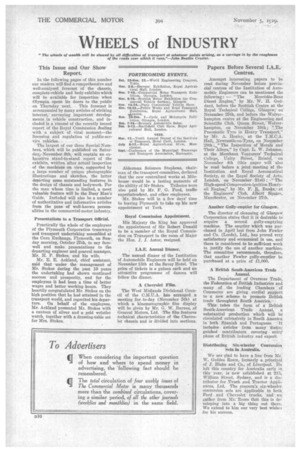 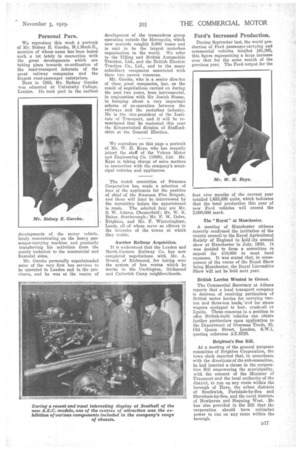 Page 114, 5th November 1929 — WHEELS of INDUSTRY " The wheels of wealth will be
Close
Noticed an error?
If you've noticed an error in this article please click here to report it so we can fix it.
Keywords : Car Manufacturers, Dearborn, Michigan, Ford Motor Company, Manganese Bronze Holdings, Plymouth, General Motors

slowed by all difficulties of transport at whatever points arising, as a carriage is by the roughness of the roads over which it runs."—Jolut Beattie Crozier.

This Issue and Our Show Report.

In the following pages of this number our readers will find a comprehensive and well-analysed forecast of the chassis, complete-vehicle and body exhibits which will be available for inspection when Olympia. opens its doors to the public

on Thursday next. This forecast is accompanied by many articles of striking interest, surveying important developments in vehicle construction, and included is a resume of the recently issued report of the Royal Commission dealing with a subject of vital moment—the licensing and regulation of public-ser

vice vehicles. • . • • The largest of our three Special Numbers, which will be published on Saturday,November Eith. will contain an exhaustive stand-to-stand report of the exhibits, written 'after actual inspection of the machines on view, supported by a large number of unique photographic illustrations and sketches, the latter depicting some outstanding features in the design of chassis and bodywork. For the man whose time is limited, a most valuable feature will be the Busy Man's Guide. Included will also be a number of authoritative and informative articles from the pens of well-known personalities in the commercial-motor industry.

Presentations to a Transport Official.

Practically the whole of the employees of the Plymouth Corporation tramways and transport undertaking assembled at • the Corn Exchange, Plymouth, on Sunday morning, October 27th, to say farewell and make presentations to the departing engineer and general manager, Mr. U. P. Stokes, and his wife.

Mr. E. E. Ackland, chief assistant, said that under the management of Mr. Stokes during the past 10 years the undertaking had shown continued success and prosperity, and for the employees it had been a time of better wages and better working hours. They heartily congratulated Mr. Stokes on the high position that he had attained in the transport world, and regretted his departure. On behalf of the employees, Mr. Ackland presented Mr. Stokes with a canteen of silver and a gold wristlet watch, together with a dressing-table set for Mrs. Stokes.

Alderman Solomon Stephens, chairman of the transport committee, declared that the new centralized works at Milehouse would be a lasting memento of the ability of Mr Stokes. Tributes were also paid by Mr. F. G. Ford, traffic superintendent, and other employees.

'Mr. Stokes will in a few days' time he leaving Plymouth to take up his new appointment at York.

His Majesty the King has approved the appointment of Sir Robert Donald to be a member of the Royal Commission on Transport in the room of Major the Hon. J. J. Astor, resigned.

The annual dinner of the Institution of Automobile Engineers will be held on November 13th at the Savoy Hotel. The price of tickets is a guinea each and an attractive programme of dances will follow the dinner.

The West Midlands Divisional Council of the C.M.U.A. has arranged a meeting for to-day (November 5th) at which a kinematographie film display will be given by Mr. G. W. Barnes, of General Motors, Ltd. The film features technical characteristics of the Chevrolet chassis and is divided into sections Papers Before Several Centres. ' •

following "The Mercedes-Benz Diesel Engine," by Mr. W. H. Goddard, before the Scottish Centre at the Royal Technical College, Glasgow,on November 25th, and before the Wolverhampton centre at the Engineering and Scientific Club, Queen Street:Wolverhampton, on November 19th; '!..The Pneumatic Tyre in Heavy Transport," by Mr. A. Healey, at the Y.M.C.A. Hall, Neweastle-on-Tyne,, on November 28th;' " The Inspection of Metals and Their Alloys," by Capt. L. W. ,Tohnson, at the Merchant Venturers' Teehnical Collage, Unity Street, Bristol, on November 4th (this paper will also be read before a joint -meeting of the Institution and Royal Aeronautical Society, at the Royal Society of Arts, London, on November • 21st) ; -" The High-speed Compression-ignition Heavyoil Engine," by Mr. F. R., Banjo,: at the Engineers' Club, • Albert Square, Manchester, on November 27th,

The director of cleansing of Glasgow Corporation states that it is desirable to acquire a second gully-emptying machine. The emptier Which was purchased in April last from John Fowler and Co. (Leeds), Ltd., has proved very satisfactory and economical in use, and there is considered to be sufficient work to justify the use of another mnehine, The committee recommends, therefore, that another Fowler gully-emptier be purchased at a price of £1,000.

The Department of Overseas Trade, the Federation of British Industries and many of _ the leading Chambers of Commerce are giving cordial .support to -a new, scheme to promote British trade throughout South America.--:.

-This. takes the form of a British South-American Trade Annual, a substantial production whieh will be circulated extensively in 'South America inboth Spanish and Portuguese. It includes articles from' gashed contributors covering • every phase of British industry and export.

We are -glad to have a line from Mr. W. _Geddes Reece, formerly a principal of J. Blake and Co., of Liverpool. .1Ie left this country for Australia early in. thisYear, is now ettablished at-215; William Street, Sydney, and is a dis-, tribtitor for Truck and Tractor Apoi-. anees, :Ltd. The concern's six-whe,eler conversion sets are applicable to both. Ford and Chevrolet ' trucks, and-. we gather from Mr. fleece that this is developing into a big thing out there. We extend to him our very best wishes for his success.

We reproduce this week a portrait of Mr. Sidney E. Garcke, M.I.Mech.E., mention of whose name has been heard such a lot lately in connection with the great developments which are taking place towards co-ordination of the road-transport interests of the great railway companies and the biggest road-passenger enterprises.

Born in 1885, Mr. Sydney Garcke was educated at University College, London. He took part in the earliest

developments of the motor vehicle, lately concentrating on the heavy passenger-carrying machine and gradually transferriirg his activitieS from the purely technical to the commercial and financial sides.

Mr. Garcke personally superintended some of the very first bus services to be operated in London and in the provinces, and he was at the centre of development of the tremendous group operating outside the Metropolis, which now controls roughly 8,000 buses and is said to be the largest motorbus organization in the world. We refer to the Tilling and British Automobile Traction, La., and the British Electric Traction Co., Ltd., and to the many subsidiary companies associated with these two parent concerns.

Mr. Gareke, who is a senior direLAer of these great companies, has, as the result of negotiations carried on durinothe past two years, been instrumental', in conjunction with Sir Josiah Stamp, in bringing about a very important scheme of co-operation between the railways and the motorbus industry. He is the vice-president of the Institute of Transport, and it will be remembered that he contested this year the Kingswinford division of Staffordshire at the General Election.

We reproduce on this page a portrait of Mr. W. H. Keys, who has recently joined the staff of the Vulcan Motor and Engineering Co. (1906), Ltd. Mr. Keys is taking charge of sales matters in connection with the company's municipal vehicles and appliances.

The watch committee of Swansea Corporation has, made a selection of four of the applicants for the position of chief of the Swansea Fire Brigade, and these will later be interviewed by the committee before the appointment is made. The selected four are Mr. S. W. Adams, Chesterfield ; Mr. W. R. Baker, Scarborough; Mr. F. W. Delve, • Brighton, and Mr. F. Winteringham, Leeds, all of whom serve as officers in the brigades of the towns at which they reside.

It is understood that the London and North-Eastern Railway Co. has now completed negotiations with Mr. A. Brand, of Richmond, for taking over the system of bus routes which he works in the Darlington, Richmond and Catte.rick Camp neighbourhoods.

During September last, the world production of Ford passenger-carrying and commercial vehicles totalled 161,305, this figure representing a large increase over that far the same month of the previous year. The Ford output for the first nine months of the current year totalled 1,633,498 units, which indicates that the total production this year of new Ford vehicles will exceed the 2,000,000 mark.

The "Royal" at Manchester.

A meeting of Manchester citizens recently confirmed the invitation of the county council to the Royal Agricultural Society of England to hold ;its annual show at Manchester in July, 1930. It was decided to form a committee to appeal for £10,000 to meet local expenses. It was stated that, in consequence of the venue of the Royal Show being Manchester, the Royal Lancashire Show will not be held next year.

The Commercial Secretary at Athens reports that a local transport company is desirous of receiving particulars of British motor lorries for carrying twoton and three-ton loads, and for steam wagons equipped to bum crude-oil cr lignite. Those concerns in a position to offer British-built vehicles can obtain further particulars upon application to the Department of Overseas Trade, 35, Old Queen Street, London, S.W.1, quoting reference AX.8720.

At a meeting of the general purposes committee of Brighton Corporation, the town clerk reported that, in accordancu with the directions of the sub-committee, he had inserted a clause in the corporation Bill empowering the municipality, with the consent of the Minister of Transport and the local authority of the district, to run on any route within the borough of Hove, the urban districts of Southwick, Portslade-by-Sea and Shoreham-by-Sea, and the rural districts of Newhaven and Steyning West, He has also provided in the Bill that the corporation should have unlimited power to run on any route within the borough.