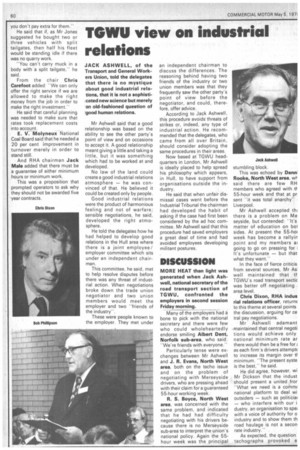 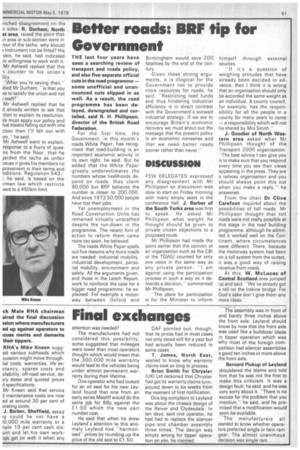 Page 62, 5th May 1978 — TGWU view on industrial relations
Close
Noticed an error?
If you've noticed an error in this article please click here to report it so we can fix it.
Keywords : Labour Relations, United Kingdom Labour Law, Ashwell, Trade Union, Unfair Dismissal In The United Kingdom, Strike Action, Labor

you don't pay extra for them."

He said that if, as Mr Jones suggested he bought two or three vehicles with split tailgates, then half his fleet would be standing idle if there was no quarry work.

-You can't carry muck in a body with .a split tailgate,he said.

He said that careful planning was needed to make sure that rates took replacement costs into account.

E. V. Molyneux National Coal Board said that he needed a 20 per cent improvement in turnover merely in order to stand still.

And RI-IA chairman Jack Male added that there must be a guarantee of either minimum hours or minimum work.

This was a proposition that prompted operators to ask why they should not be awarded five year contracts. Mr Ashwell said that a good relationship was based on the ability to see the other party's point of view and on occasions to accept it. A good relationship meant giving a little and taking a little, but it was something which had to be worked at and developed.

No law of the land could create a good industrial relations atmosphere — he was convinced of that. He believed it could be created only by people.

Good industrial relations were the product of harmonious feeling and not of warfare; sensible negotiations, he said, developed the right atmosphere.

He told the delegates how he had helped to develop good relations in the Hull area where there is a joint employee/ employer committee which sits under an independent chairman.

This committee, he said, met to help resolve disputes before there was any threat of industrial action. When negotiations broke down the trade union negotiator and two union members would meet the employer and two "friends of the industry-.

These were people known to the employer. They met under an independent chairman to discuss the differences. The reasoning behind having two friends of the industry or two union members was that they frequently saw the other party's point of view before the negotiator, and could, therefore, offer advice.

According to Jack Ashwell, this procedure avoids threats of strikes or, indeed, any type of industrial action. He recommended that the delegates, who came from all over Britain, should consider adopting the same procedures in their areas.

Now based at TGWU headquarters in London, Mr Ashwell is ideally placed to help spread his philosophy which appears, in Hull, to have support from organisations outside the industry.

He said that when unfair dismissal cases went before the Industrial Tribunal the chairman had developed the habit of asking if the case had first been considered by the ad hoc committee. Mr Ashwell said that this procedure had saved employers a great deal of time and had avoided employees developing militant postures.

MORE HEAT than light was generated when Jack Ashwell, national secretary of the road transport section of TGWU, confronted the employers in second session Friday morning.

Many of the employers had a bone to pick with the national secretary and there were few who could wholeheartedly endorse smiling Albert Dent, Norfolk sub-area, who said. -We're friends with everyone.

Particularly tense were exchanges between Mr Ashwell and J. R. Evans, North West area, both on the tacho issue and on the problem of negotiating with Merseyside drivers, who are pressing ahead with their claim for a guaranteed 55-hour working week.

R. S. Boyce, North West area, was concerned with the same problem, and indicated that he had had difficulty negotiating with his drivers because there is no Merseyside sub-area to interpret the union's national policy. Again the 55hour week was the principal stumbling block.

This was echoed by Donn Rooke, North West area, wF said there are few RH members who agreed with

ti55-hour week and that at pr sent ''it was total anarchy'' Liverpool.

Mr Ashwell accepted thi there is a problem on Me seyside, but contended "It's matter of education on boi sides. At present the 55-hoi week has become a rallyir point and my members ai going to go on pressing for It's unfortunate — but that what they want.

In the face of fierce criticis from several sources, Mr As well maintained that TGWU's road transport sectic was better off negotiating area level.

Mr Ashwell adamant niaintained that central negoti tions would achieve only national minimum rate ar there would then be a free for i as each firm's drivers attemptE to increase its margin over tt minimum. "The present syste is the best." he said.

He did agree, however, wi Mr Dickson that the indust should present a united fror "What we need is a commt national platform to deal wi outsiders — such as politiciai — who interfere with our i dustry, an organisation to spei with a voice of authority for o industry and to show them th road haulage is not a secon rate industry.

As expected, the question tachographs provoked e inched disagreement on the o sides. R. Durham, North st area, raised the point that In area or sub-section were in four of the tacho, why should instrument not be fitted? His vers, he said, had indicated )ir willingness to work with it. Mr Ashwell replied that this counter to his union's licy.

"What you're saying then," )lied Mr Durham, "is that you veto satisfy the union and not staff?'" Mr Ashwell replied that he d already written to ask that 3tion to explain its resolution. Ve must apply our policy and hat means falling out with one ation then I'll fall out with ,m," he said.

Mr Ashwell went to explain, response to a flurry of quesns from the floor, that he iarded the tacho as unfair cause it gives his members no provement in their terms and nditions. Regulation 543 / , he said, is based on the rman law which restricts vers to a 450 km limit.