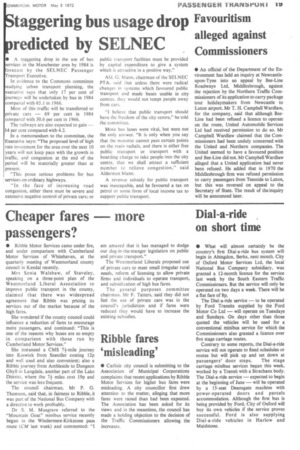 Page 21, 5th May 1972 — Favouritism alleged against Commissioners
Close
Noticed an error?
If you've noticed an error in this article please click here to report it so we can fix it.
Keywords : Counties Of England, Geography Of England, Local Government In England, Middlesbrough, Teesside, Luton, Politics

• An official of the Department of the Environment has held an inquiry at Newcastleupon-Tyne into an appeal by Bee-Line Roadways Ltd, Middlesbrough, against the rejection by the Northern Traffic Commissioners of its application to carry package tour holidaymakers from Newcastle to Luton airport. Mr T. H. Campbell Wardlaw, for the company, said that although BeeLine had been refused a licence to operate on the route, United Automobile Services Ltd had received permission to do so. Mr Campbell Wardlaw claimed that the Commissioners had been unduly concerned with the United and Northern companies. The United seemed to have a favoured position and Bee-Line did not. Mr Campbell Wardlaw alleged that a United application had never been refused. He added that in 1970 the Middlesbrough-firm was refused permission to carry passengers from Teesside to Luton, but this was reversed on appeal to the Secretary of State. The result of the inquiry will be announced later.