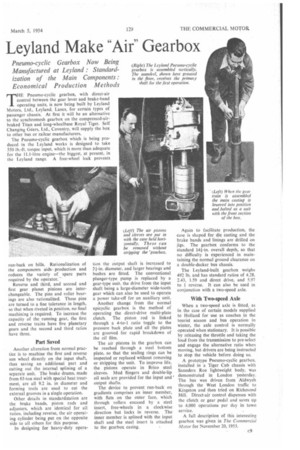 Page 47, 5th March 1954 — Leyland Make "Air" Gearbox
Close
Noticed an error?
If you've noticed an error in this article please click here to report it so we can fix it.

THE Pneumo-cyclic gearbox, with direct-air control between the gear lever and brake-band operating units, is now being built by Leyland Motors, Ltd., Leyland, Lancs, for certain types of passenger chassis. At first it will be an alternative to the synchromesh gearbox on the compressed-airbraked Titan and long-wheelbase Royal Tiger. Self Changing Gears, Ltd., Coventry, will supply the box to other bus or railcar manufacturers.

The Pneumo-cyclic gearbox which is being produced in the Leyland works is designed to take 550 lb.-ft. torque input, which is more than adequate for the 11.1-litre engine—the biggest, at present, in the Leyland range. A free-wheel lock prevents run-back on hills. Rationalization of the components aids. production and reduces the variety of spare parts required by the operator:

Reverse and third, and second and first gear planet pinions are interchangeable. The pins and roller bearings are also rationalized. These pins are turned to a fine tolerance in length, so that when riveted in position, no final machining is required. To increase the capacity of the running gear, the first and reverse trains have five planetary gears and the second and third ratios have three.

Another alteration from normal practice is to machine the first and reverse sun wheel directly on the input shaft, thus saving an additional part and cutting out the internal splining of a separate unit. The brake drums, made from 65-ton steel with special heat treatment, are all 9.2 in. in diameter and forming tools arc used to cut the external grooves in a single operation.

Other details in standardization are the brake bands, piston rods and adjusters, which are identical for all ratios, including reverse, the air operating cylinder being put on the opposite side to all others for this purpose.

In designing for heavy-duty opera

tion the output shaft is increased to 21-in. diameter, and larger bearings and bushes are fitted. The conventional plunger-type pump is replaced by a gear-type unit, the drive from the input shaft being a large-diameter wide-tooth gear which can also be used to operate a power take-off for an auxiliary unit.

Another change from the normal epicyclic gearbox is the method of operating the direct-drive multi-plate clutch. The piston rod is linked through a 4-to-I ratio toggle to the pressure back plate and all the plates are grooved for rapid breakdown of the oil film.

The air pistons in the gearbox can be reached through a steel bottom plate, so that the sealing rings can be inspected or replaced without removing or stripping the unit. To improve life, the pistons operate in Brico steel sleeves. Mud flingers and double-lip oil seals are provided for the input and ' output shafts.

The device to prevent run-back on gradients comprises an inner member, with flats on the outer face, which through rollers encased by a steel insert, free-wheels in a clockwise direction but locks in reverse. The inner member is splined with the input shaft and the steel insert is attached to the gearbox casing. Again to facilitate production, the case is shaped for die casting and the brake bands and linings arc drilled on jigs. The gearbox conforms to the Standard 14-1-in. overall depth, so that no difficulty is experienced in maintaining the normal ground clearance on a double-decker bus chassis.

When a two-speed axle is fitted, as in the case of certain models supplied to Holland for use as coaches in the tourist season and bus operation in winter, the axle control is normally operated when stationary. It is possible by releasing the throttle and taking the load from the transmission to pre-select and engage the alternative ratio when moving, but drivers are being instructed to stop the vehicle before doing so.

A prototype Pneumo-cyclic gearbox, installed in a Tiger Cub chassis with Saunders Roe lightweight body, was demonstrated in London yesterday. The bus was driven from Aldwych through the West London traffic to Kingston and then tried on Richmond Hill. Direct-air control dispenses with the clutch or gear pedal and saves up to 4,000 operations per day in town service.

A full description of this interesting gearbox was given in The Commercial Motor for November 20, 1953.