Friend in court in fight for exports 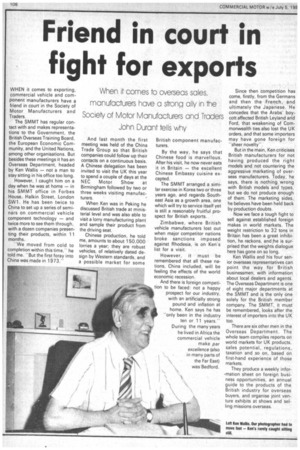 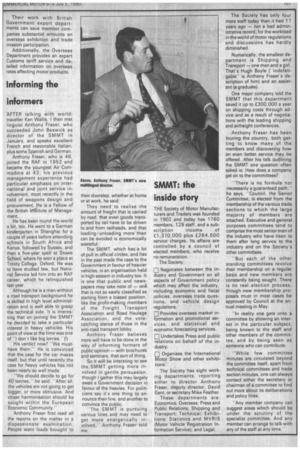 Page 108, 5th July 1980 — Friend in court in fight for exports
Close
Noticed an error?
If you've noticed an error in this article please click here to report it so we can fix it.
Keywords : Society Of Motor Manufacturers And Traders, British International Motor Show, Ford Motor Company, Business, Manufacturing, Mechanical Engineering

When it comes to overseas sales, manufacturers have a strong ally in he Society of Motor Manufacturers and Traders John Durant tells why

WHEN it comes to exporting, commercial vehicle and component manufacturers have a friend in court in the Society of Motor Manufacturers and Traders.

The SMMT has regular contact with and makes representations to the Government, the British Overseas Training Board, the European Economic Community, and the United Nations, among other organisations. But besides these meetings it has an Overseas Department, headed by Ken Wallis — not a man to stay sitting in his office too long.

However, I caught him on a day when he was at home — in his SMMT office in Forbes House, Halkin Street, London SW1. He has been twice to China to set up a series of seminars on commercial vehicle component technology — and twice more to see them through, with a dozen companies presenting their products, within 11 months.

"We moved from cold to completion within this time,he told me. "But the first foray into China was made in 1973."

And last month the first meeting was held of the China Trade Group so that British companies could follow up their contacts on a continuous basis. A Chinese delegation has been invited to visit the UK this year to spend a couple of days at the NEC Motor Show at Birmingham followed by two or three weeks visiting manufacturers.

When Ken was in Peking he discussed British trade at ministerial level and was also able to visit a lorry manufacturing plant and sample their product from the driving seat.

Chinese production, he told me, amounts to about 150,000 lorries a year; they are robust vehicles, of relatively dated design by Western standards, and a possible market for some British component manufacturers.

By the way, he says that Chinese food is marvellous. After his visit, he now never eats it in Britain — the excellent Chinese Embassy cuisine excepted.

The SMMT arranged a simi lar exercise in Korea two or three years ago, and regards Southeast Asia as a growth area, one which will try to service itself yet is still a reasonably fruitful prospect for British exports.

Zimbabwe, where British vehicle manufacturers lost out when major competitor nations broke sanctions imposed against Rhodesia, is on Ken's list for a visit.

However, it must be remembered that all these nations, China included, will be feeling the effects of the world economic recession.

And there is foreign competition to be faced: not a happy prospect for our industry, with an artificially strong pound and inflation at home. Ken says he has -only been in the industry ten or 11 years."' During the many years he lived in Africa the commercial vehicle make par excellence (also in many parts of the Far East) was Bedford.

Since then competition has come, firstly, from the Germans and then the French, and ultimately the Japanese. He concedes that the Arabs' boy cott affected British Leyland and Ford, that weakening of Commonwealth ties also lost the UK

orders, and that some importers may have gone foreign for "sheer novelty-.

But in the main, Ken criticises British manufacturers for not having produced the right models and not countering the aggressive marketing of over seas manufacturers. Today, he says, there is nothing wrong with British models and types, but we do not produce enough of them. The marketing sides, he believes have been held back by production doubts.

Now we face a tough fight to sell against established foreign makes in world markets. The weight restriction to 32 tons in Britain has been a great inhibi tion, he reckons, and the is surprised that the weights dialogue here has gone on so long.

Ken Wallis and his four senior overseas representatives can point the way for British businessmen, with information about local dealers and agents.

The Overseas Department is one of eight major departments at the SMMT and is the only one solely for the British member company. The SMMT, it must be remembered, looks after the interest of importers into the UK too.

There are six other men in the Overseas Department. The whole team compiles reports on world markets for UK products, sales potential, regulations, taxation and so on, based on first-hand experience of those markets.

They produce a weekly information sheet on foreign busi ness opportunities, an annual guide to the products of the British industry for overseas buyers, and organise joint venture exhibits at shows and selling missions overseas. Their work with British Government export departments can save member companies substantial amounts on overseas exhibition and trade mission participation.

AFTER talking with worldtraveller Ken Wallis, I then met linguist Anthony Fraser, who succeeded John Beswick as director of the SMMT in January, and speaks excellent French and reasonable Italian, plus some Spanish and German,

Anthony Fraser, who is 46, joined the RAF in 1952 and became the youngest Air Commodore at 43; his previous management experience had particular emphasis on international and joint service involvement, most recently in the field of weapons design and procurement. He is a Fellow of the British kiltitute of Management.

He has been round the world a bit, too. He went to a German kindergarten in Shanghai for a couple of years before attending schools in South Africa and Kenya, followed by Sussex, and then a five-year spell at Stowe School, where he won a place at Trinity College, Oxford. He was to have studied law, but National Service led him into an RAF career, which he relinquished last year.

Although he is a man without a road transport background he is skilled in high level administration and is well able to grasp the technical side. It is interesting that on joining the SMMT he decided to take a particular interest in heavy vehicles. His point of view at the time was one of "I don't like big lorries."(!)

His verdict now? -We musthave them." He is convinced that the case for the car makes itself, but that until recently the case for heavy vehicles has not been nearly so well made.

"We should decide to go for 40 tonnes,he said. -After all, the vehicles are not going to get bigger, or more obtrusive. And closer harmonisation should be sought within the European Economic Community."

Anthony Fraser first read all the reports on the matter in a dispassionate examination. People want loads brought to their doorstep, whether at home or at work, he said.

They need to realise the amount of freight that is carried by road, that even goods transported by rail have to be driven to and from railheads, and that loading/unloading more than can be avoided is economically wasteful.

The SMMT, which has a lot of pull in official circles, and has in the past made the case to the Government in favour of heavier vehicles, is an organisation held in high esteem in industry too. It is one that public and newspapers may take note of — one that is not so easily classified as starting from a biased position, like the profit-making members of the Freight Transport Association and Road Haulage Association, and the votecatching stance of those in the anti-road transport lobby.

Anthony Fraser believes more will have to be done in the way of informing formers of public opinion — with brochures and seminars, that sort of thing.

So it will be intersting to see the SMMT getting more involved in gentle persuasion. though I gather this may largely await a Government decision in favour of the heavies. For politicians say it's one thing to announce their line, and another to convince the public.

-The SMMT is pursuing various lines and may need to get more energetically involved,'" Anthony Fraser told me.

THE Society of Motor Manufacturers and Traders was founded in 1 902 and today has 1760 members, 129 staff, and a sub scription income of £1,370,000 plus £264,500 service charges. Its affairs are controlled by a council of elected members, who receive no remuneration.

The Society: • Negotiates between the in dustry and Government on all aspects of Government policy which may affect the industry, including economic and fiscal policies, overseas trade questions, and vehicle design regulations.

0 Undertakes Press and public relations on behalf of the industry.

O Organises the International Motor Show and other exhibitions.

These departments are: Economics; Overseas; Press and Public Relations; Shipping and Transport; Technical; Exhibitions; Statistics and MVR IS (Motor Vehicle Registration Information Service): and Legal. The Society has only four more staff today than it had 17 years ago — not a bad administrative record, for the workload in the world of motor regulations and discussions has hardly diminished.

Numerically, the smallest department is Shipping and Transport — one man and a girl. That's Hugh Boyle (-indefatigable" is Anthony Fraser's description of him) and an assistant (a graduate).

One major company told the SMMT that this department saved it up to £300,000 a year on shipping costs through advice and as a result of negotiations with the leading shipping and airfreight conferences.

Anthony Fraser has been touring the country, both getting to know many of the members and discovering how an even better service may be offered. After his talk outlining the SMMT one question often asked is: How does a company get on to the committees?

-There is no formula nor necessarily a guaranteed path, he says, "Council, the Senior Committee, is elected from the membership of the various trade sections to which the large majority of members are attached. Executive and general purposes committees tend to comprise the most senior men of the industry who have risen to them after long service to the industry and on the Society's other committees.

-But each of the other standing committees revolve their membership on a regular basis and new members are constantly being sought. There is no real election process, though new membership proposals must in most cases be approved by Council at the annual meeting in May.

"In reality one gets onto a committee by showing an interest in the particular subject, being known to the staff and other members of the committee, and by being seen as someone who can contribute.

"While few committee minutes are circulated beyond the committee itself, apart from technical committees and trade section minutes, one can always contact either the secretary or • chairman of a committee to find out more about its deliberations and policy lines.

"Any member company can suggest areas which should be under the scrutiny of the specialist committee. And any member can arrange to talk with any of the staff at any time.