Nightowl over Um in hock 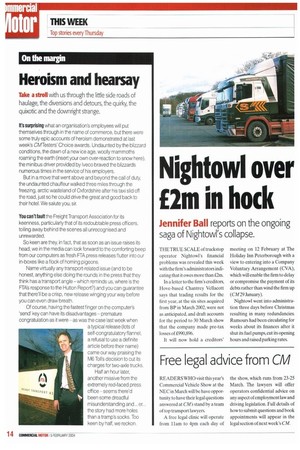 Page 14, 5th February 2004 — Nightowl over Um in hock
Close
Noticed an error?
If you've noticed an error in this article please click here to report it so we can fix it.
Keywords : Business / Finance

Jennifer Ball reports on the ongoing saga of Nightowl's collapse.

THE TRUE SCALE of truckstop operator Nightowl's financial problems was revealed this week with the firm's administrators indicating that it owes more than £2m.

In a letter to the firm's creditors, Hove-based Chantrey Vellacott says that trading results for the first year, at the six sites acquired from BP in March 2002, were not as anticipated, and draft accounts for the period to 30 March show that the company made pre-tax losses of £990,896.

It will now hold a creditors' meeting on 12 February at The Holiday Inn Peterborough with a view to entering into a Company Voluntary Arrangement (CVA), which will enable the firm to delay or compromise the payment of its debts rather than wind the firm up (CM 29 January).

Nightowl went into administration three days before Christmas resulting in many redundancies. Rumours had been circulating for weeks about its finances after it shut its fuel pumps, cut its opening hours and raised parking rates.