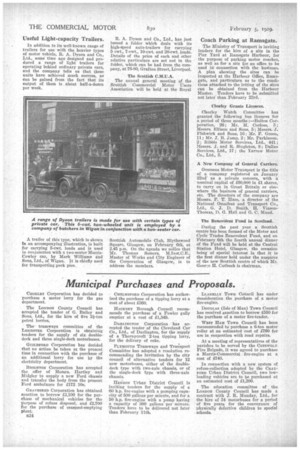 Page 8, 5th February 1929 — Municipal Purchases and Proposals.
Close
Noticed an error?
If you've noticed an error in this article please click here to report it so we can fix it.

CHORD= Corporation has decided to purchase a motor lorry for the gas department.

The LONDON County Council has accepted the tender of G. Bailey and Sons, Ltd., for the hire of five 21-ton petrol lorries.

The tramways committee of the Leicesren Corporation is obtaining tenders for the supply of six doubledeck and three single-deck motorbuses.

GUILDFORD Corporation has decided that no action be taken at the present time in connection with the purchase of an additional lorry for use by the electricity department.

BRIGHTON Corporation has accepted the offer of Messrs. Hartley and Midgley to supply a new Ford chassis and transfer the body from the present Ford ambulance for £172 10s.

B24 • CHELMSFORD Corporation has authorized the purchase of a tipping lorry at a cost of about £360.

HACKNEY Borough Council recommends the purchase of a Fowler gully emptier at a cost of £1,349.

Dxamucrox Corporation has accepted the tender of the Cleveland Car Co., Ltd., of Darlington, for the supply of a Thornycroft 2-ton tipping lorry, for the delivery of coke.

Pry/storm Tramways and Transport Committee has adopted a resolution recommending the invitation by the city council of alternative tenders for 12 new motorbuses, either of the doubledeck type with two-axle chassis, or of the single-deck type with three-axle chassis.

FIENDON Urban District Council is inviting tenders for the supply of a 60 h.p. fire-engine with a pumping callacity of 500 gallons per minute, and for a 50 h.p. fire-engine with a pump having a capacity of 300 gallons per minute. Tenders have to be delivered not later than February 11th. LLANELLY Town Council has under donsideration the purchase of a motor Are-engine.

DOUGLAS (Isle of Man) Town Council has received sanction to borrow £550 for the purchase of a motor fire-tender.

WEST HAM Town Council has been recommended to purchase a 6-ton motor roller at an estimated cost of £760 for use in connection with road repairs.'

At a meeting of representatives of the parishes to be served by the COTSWOLD Fire Brigade, it was agreed to purchase a Morris-Commercial fire-engine at a cost of .£740, In connection with a new system of refuse-collection adopted by the CRAYFORD Urban District Council, two lowloading vehicles are to be purchased at an estimated cost of £1,200.

The education committee of the, LONDON County Council has made ft contract with 3", R. Munday, Ltd., for the hire of 34 motorbuses for a period of five years for the conveyance of physically defective children to special schools.