Who's driving that truck there? 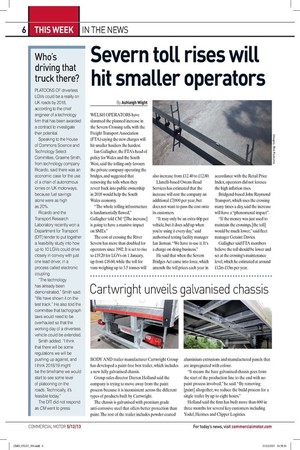 Page 5, 5th December 2013 — Who's driving that truck there?
Close
Noticed an error?
If you've noticed an error in this article please click here to report it so we can fix it.

PLATOONS OF driverless LGVs could be a reality on UK roads by 2018, according to the chief engineer of a technology firm that has been awarded a contract to investigate their potential.

Speaking to the House of Commons Science and Technology Select Committee, Graeme Smith, from technology company Ricardo, said there was an economic case for the use of a chain of autonomous lorries on UK motorways, because fuel savings alone were as high as 20%.

Ricardo and the Transport Research Laboratory recently won a Department for Transport (DfT) tender to put together a feasibility study into how up to 10 LGVs could drive closely in convoy with just one lead driver, in a process called electronic coupling.

"The technology has already been demonstrated," Smith said. "We have shown it on the test track." He also told the committee that tachograph laws would need to be overhauled so that the working day of a driverless vehicle could be extended. Smith added: "I think that there will be some regulations we will be pushing up against, and I think 2018/19 might be the timeframe we would start to see some level of platooning on the

The DfT did not respond as CM went to press.