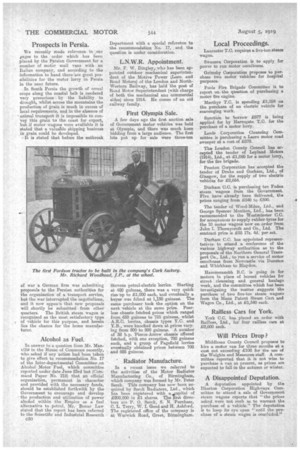 Page 8, 5th August 1919 — Alcohol as Fuel.
Close
Noticed an error?
If you've noticed an error in this article please click here to report it so we can fix it.
Keywords : Alcohol Abuse, Alcoholism, Drinking Culture, Drug Addiction, House Of Commons Of The United Kingdom

In answer to a question from Mr. Manville in the House of Commons recently, who asked if any action had been taken to give effect to recommendation No. 17 of the Inter-departmental Committee,on Alcohol Motor Fuel, which committee reported under date June 23rd last (Command Paper No. 218) that an official organization, permanent in character and provided with the necessary funds, should be established forthwith by the Government to encourage and develop the production and utilization of power alcohol within the Empire as a fuel alternative to petrol, Mr. 13onar Law stated that the report has been referred to the Scientific and Industrial Research 030 Department with a special reference to the recommendation No. 17, and the question is under consideration.