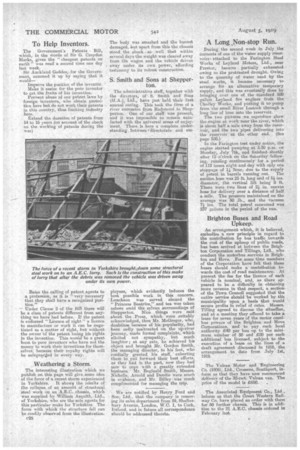 An arrangement which, it is believed, embodies a new principle in regard to the contribution by bus traffic towards the cost of the upkeep of public roads, has been arrived at between the Brighton Corporation and Tillings, Lta., who conduct the motorbus services in Brighton and Have. For some time members of the Corporation have felt that these buses should make a contribution towards the cost of road maintenance. At present the fee for the licence of each vehicle is nominal, and, as there appeased to be a, difficulty in obtaining more revenue in that respect, a section of the Town Council suggested that the entire service should be worked by the municipality upon. a basis that would secure profits in relief of rates. Messrs. Tilling agreed to discuss the situation, and at a meeting they offered to take a lease for seven years of the motor omnibus powers of the Brighton and Hove Corporations, and to pay each local authority £40 per bus up to the minimum number of 50 and £20 per each additional bus licensed, subject to the execution of a lease on the lines of a draft agreement discussed in 1916, the arrangement to date from July 1st, 1919.

The Vulcan Motor and Eiagineering Co. (1906), Ltd., CroasenS, Southport, inform us that they have now commenced delivery of the 30-cwt. Vulcan van. The price of the model is £600. .

The Associated Equipment Co., Ltd., inform us that the Great Western Railway Co. have placed an order with them for 50 further chassis. This is in addition to the 21 A.E.C. chassis ordered in February last.