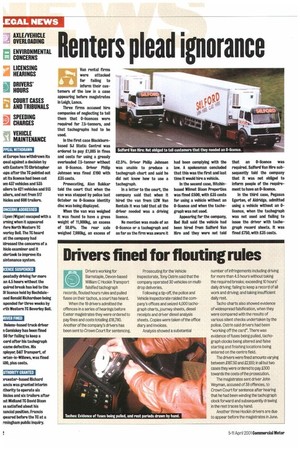 Page 14, 5th April 2001 — Drivers fined for flouting rules
Close
Noticed an error?
If you've noticed an error in this article please click here to report it so we can fix it.
Keywords : Tachograph, Tachometer, Law / Crime

When the 19 drivers admitted the offences in a series of hearings before Exeter magistrates they were ordered to pay fines and costs totalling £18y50. Another of the company's drivers has been sent to Crown Court for sentencing. Prosecuting for the Vehicle Inspectorate, Tony Ostrin said that the company operated 30 vehicles on multidrop deliveries.

Following a tip-off, the police and Vehicle Inspectorate raided the company's offices and seized 4,000 tachograph charts,journey sheets, diesel receipts and driver diesel analysis sheets. Copies were taken of the office diary and invoices.

Analysis showed a substantial number of infringements including driving for more than 4.5 hours without taking the required breaks; exceeding 10 hours' daily driving; failing to keep a record of all work and driving: and taking insufficient daily rest.

Tacho charts also showed evidence of widespread falsification, when they were compared with the results of various silent checks undertaken by the police. Ostrin said drivers had been "working off the card. There was evidence of fuses being pulled, tachograph clocks being altered and false starting and finishing locations being entered on the centre field.

The drivers were fined amounts varying between £187.50 and 22;100; in all but two cases they were ordered to pay £300 towards the costs of the prosecution.

The magistrates sent driver John Weyman, accused of 38 offences, to Crown Court for sentence after hearing that he had been winding the tachograph clock forward and subsequently drawing in the rest traces by hand.

Another three Hockin drivers are due to appear before the magistrates in June,