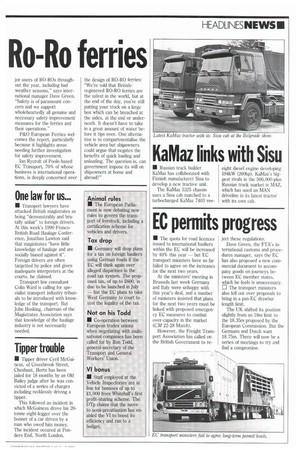 Page 7, 5th April 1990 — One law for us...
Close
Noticed an error?
If you've noticed an error in this article please click here to report it so we can fix it.
Keywords : Magistrate, Haulage

• Transport lawyers have attacked British magistrates as being "demonstrably and brutally unfair" to foreign drivers. At this week's 1990 FrancoBritish Road Haulage Conference, Jonathan Lawton said that magistrates "have little knowledge of haulage and are socially biased against it". Foreign drivers are often targetted by police and given inadequate interpreters at the courts, he claimed.

Transport law consultant Colin Ward is calling for specialist transport industry tribunals to be introduced with knowledge of the transport. But John Hosking, chairman of the Magistrates Association says that knowledge of the haulage industry is not necessarily needed.