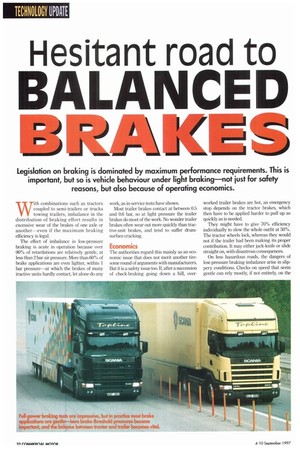 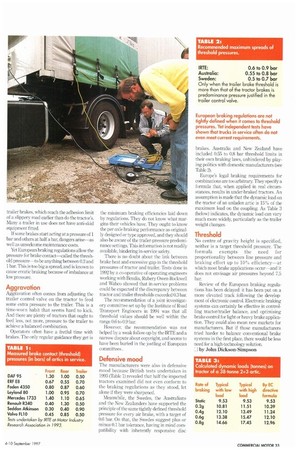 Legislation on braking is dominated by maximum performance requirements. This is important, but so is vehicle behaviour under light braking—not just for safety reasons, but also because of operating economics.

With combinations such as tractors coupled to semi-trailers or trucks towing trailers, imbalance in the distribution of braking effort results in excessive wear of the brakes of one axle or another—even if the maximum braking efficiency is legal.

The effect of imbalance in low-pressure braking is acute in operation because over 90% of retardations are relatively gentle, at less than 2 bar air pressure. More than 60% of brake applications are even lighter, within 1 bar pressure—at which the brakes of many tractive units hardly contact, let alone do any work, as in-service tests have shown.

Most trailer brakes contact at between 0.5 and 0.6 bar, so at light pressure the trailer brakes do most of the work. No wonder trailer brakes often wear out more quickly than tractive-unit brakes, and tend to suffer drumsurface cracking.

The authorities regard this mainly as an economic issue that does not merit another tiresome round of arguments with manufacturers. But it is a safety issue too. If, after a succession of check-braking going down a hill, over worked trailer brakes are hot, an emergency stop depends on the tractor brakes., which then have to be applied harder to pull up as quickly as is needed_ They might have to give 70% efficiency individually to slow the whole outfit at 50%. The tractor wheels lock, whereas they would not if the trailer had been making its proper contribution. It may either jack-knife or slide straight on, with disastrous consequences.

(hi less hazardous roads, the dangers of low-pressure braking imbalance arise in slippery conditions. Checks on speed that seem gentle can rely mostly, if not entirely, on the trailer brakes, which reach the adhesion limit of a slippery road earlier than do the tractor's. Many a trailer in use does not have anti-skid equipment fitted.

If some brakes start acting at a pressure of 1 bar and others at half a bar, dangers arise-as well as unwelcome maintenance costs.

Yet European braking regulations allow the pressure for brake contact-called the threshold pressure-to be anything between 0.2 and 1 bar. This is too big a spread, and is known to cause erratic braking because of imbalance at low pressure.

Operators often have a fretful time with brakes. The only regular guidance they get is the minimum braking efficiencies laid down by regulations. They do not know what margins their vehicles have. They ought to know the per-axle braking performance as originally designed or type approved, and they should also be aware of the trailer-pressure predominance settings. This information is not readily available, hindering in-service safety.

There is no doubt about the link between brake heat and excessive gap in the threshold pressures of tractor and trailer. Tests done in 1992 by a co-operative of operating engineers working with Bendix, Rubery Owen-Rockwell and Wabco showed that in-service problems could be expected if the discrepancy between tractor and trailer thresholds exceeded 0.3 bar.

The recommendation of a joint investigatory committee set up by the Institute of Road Transport Engineers in 1994 was that all threshold values should be well within the range 0.6 to 0.9 bar.

However, the recommendation was not helped by a weak follow-up by the IRTE and a narrow dispute about copyright, and seems to have been buried in the jostling of European committee.s

The manufacturers were also in defensive mood because British tests undertaken in 1993 (Table 1) revealed that half the imported tractors examined did not even conform to the braking regulations as they stood, let ;done if they were sharpened.

N.leanwhile, the Swedes, the Australians and the New Zealanders have supported the principle of the same tightly defined threshold pressure for every air brake, with a target of 0.6 bar. On that, the Swedes suggest plus or minus 0.1 bar tolerance, having in mind compatibility with inherently responsive disc

brakes. Australia and New Zealand have included 0.55 to 0.8 bar threshold limits in their own braking laws, unhindered by playing politics with domestic manufacturers (see Table 2).

Europe's legal braking requirements for combinations are too arbitrary. They specify a formula that, when applied in real circumstances, results in under-braked tractors. An assumption is made that the dynamic load on the tractor of an unladen artic is 15% of the maximum load on the coupling. As Table 3 (below) indicates, the dynamic load can vary much more widely, particularly as the trailer weight changes.

No centre of gravity height is specified, neither is a target threshold pressure. The formula exempts the need for proportionality between line pressure and braking effort up to 10% efficiency-at which most brake applications occur-and it does not envisage air pressures beyond 7.5 bar.

Review of the European braking regulations has been delayed: it has been put on a more elevated track following the development of electronic control. Electronic braking systems can certainly be effective in controlling tractor/trailer balance, and optimising brake control for light or heavy brake application. They could also mean new markets for manufacturers. But if those manufacturers tried harder to balance conventional brake systems in the first place, there would be less need for a high-technology solution.

Only when the trailer brake threshold is more than that of the tractor brakes is predominance pressure justified in the trailer control valve.

European braking regulations are not tightly defined when it comes to threshold pressures. Yet independent tests have shown that trucks in service often do not even meet current requirements.

Calculated dynamic loads (tonnes) on tractor of a 38-tonne 2+3 artic.

Rate of Typical Typical By EC