LEYLAND'S PANTHER HAS A CUB 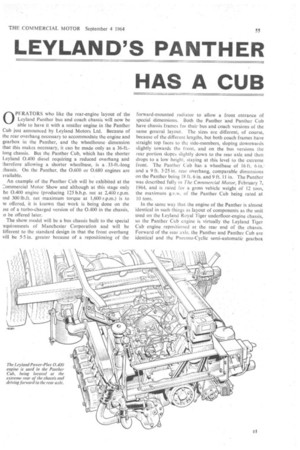 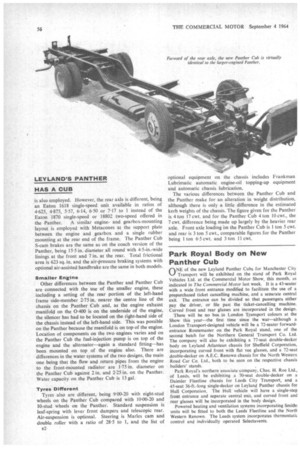 Page 57, 4th September 1964 — LEYLAND'S PANTHER HAS A CUB
Close
Noticed an error?
If you've noticed an error in this article please click here to report it so we can fix it.

OPERATORS who like the rear-engine layout of the Leyland Panther bus and coach chassis will now be able to have it with a smaller engine in the Panther Cub just announced by Leyland Motors Ltd. Because of the rear overhang necessary to accommodate the engine and gearbox in the Panther, and the wheelhouse dimension that this makes necessary, it can be made only as a 36-ft.tong chassis. But the Panther Cub, which has the shorter Leyland 0.400 diesel requiring a reduced overhang and therefore allowing a shorter wheelbase, is a .. 33-ft.-long :hassis. On the Panther, the 0.600 or 0.680 engines are tvailable.

The show model will be a bus chassis built to the special .equirernents of Manchester Corporation and will be iifferent to the standard design in that the front overhang vill be 5.5 in. greater because of a repositioning of the forward-mounted radiator to allow a front entrance of special dimensions. Both the Panther and Panther Cub have chassis frames for their bus and coach versions of the same general layout. The sizes are different, of course, because of the different lengths, but both coach frames have straight top faces to the side-members, sloping downwards slightly towards the front, and on the bus versions the rear portion slopes slightly down to the rear axle and then drops to a low height, staying at this level to the extreme front. The Panther Cub has a wheelbase of 16 ft. 6 in.' and a 9 ft. 3.25 in. rear overhang, comparable dimensions on the Panther being 18 ft. 6 in. and 9 ft. 11 in. The Panther was described fully in The Commercial Motor, February 7, 1964, and is rated for a gross vehicle Weight of 12 tons, the maximum g.v.w. of the Panther Cub being rated at 10 tons.

is also employed. However, the rear axle is different, being an Eaton 1618 single-speed unit available in ratios of 4.625, 4-875, 5-57, 6-14, 6.50 or 7-17 to 1 instead of the Eaton 1870 single-speed or 18802 two-speed offered in the Panther. A similar engineand gearbox-mounting layout is employed with Metacones at the support plate between the engine and gearbox and a single rubber mounting at the rear end of the frame. The Panther Cub S-cam brakes are the same as on the coach version of the Panther, being 15-5 in. diameter all round with 4-5-in.-wide linings at the front and 7 in. at the rear. Total frictional area is 623 sq. in. and the air-pressure braking systems with optional air-assisted handbrake are the same in both models.

Tyres Different Tyres also are different, being 9.00-20 with eight-stud wheels on the Panther Cub compared with 10-00-20 and 10-stud wheels on the Panther. Standard suspension is leaf-spring with lever front dampers and telescopic rear. Air-suspension is optional. Steering is Marles cam and double roller with a ratio of 28-5 to 1, and the list of e/ optional equipment on the chassis includes Frankman Lubrimatic automatic engine-oil topping-up equipment and automatic chassis lubrication.