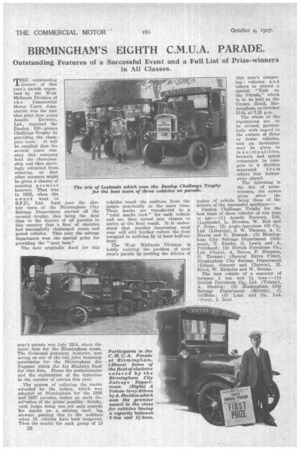 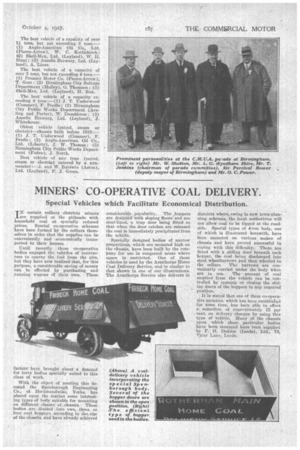 Page 44, 4th October 1927 — BIRMINGHAM'S EIGHTH C.M.U.A. PARADE.
Close
Noticed an error?
If you've noticed an error in this article please click here to report it so we can fix it.
Keywords : British Brands, Birmingham, Mini

Outstanding Features of a Successful Event and a Full List of Prize-winners in All Classes.

THE outstanding feature of this • year's parade organized by the West Midlands Division of the Commercial Motor Users Association was the fact that after four years Ansells " Brewery, Ltd., regained the Dunlop 100guinea Challenge Trophy by providing the cham• pion team. It will be recalled that for several years running this company held the championship and then sportingly refrained from entering, so that other entrants might be given a chance of securing premier honours. That was in 1025, when the award went to S.P.D., Ltd. Last year the electric team of the Birmingham City Salvage Department carried off the coveted trophy, this being the first time in the history of all parades in this country that a fleet of eleetrics had successfully challenged steam and petrol vehicles. This year the salvage department won the special prize for providing the "next best."

The date originally fixed for this

year's parade was July 25th, about the usual date for the Birmingham event. The divisional secretary, however, was acting as one of the two joint honorary secretaries for the Birmingham Air Pageant which the Air Ministry fixed for that date. Hence the postponement and the explanation of the reduction in the number of entries this year.

The system of collating the marks awarded by the judges, which was adopted at Birmingham for the 1926 and 1927 parades, makes an early distrPlution of the prizes possible. Briefly, .2..aeh judge doing one job only records his marks on. a scoring card, hia Stewart:. passing this to the auditors when 15 7ebicles have been inspected. Thos the marks for each group of 15 vehicles reach the auditors from the judges practically at the same time. These marks are transferred to a "total marks card" for each vehicle and are then sorted into classes to arrive at the final result. It is understood that another innovation next year will still further reduce the time occupied in auditing by at least half-anhour.

this year's competing vehicles a n others to attend a special "Talk on the Parade," which is to be held at the Crown Hotel, Birmingham, on October 11th, at 7.15 p.m...

The whole of the regulations are to be revised, particularly with regard to the owners of three or fewer vehicles, .and an invitation may be given to in unicipalities, brewers and petrol companies to compete in a division separated from others less fortunately placed.

The best vehicle of a capacity of over 3 tons, but not exceeding 4 tons :— (1) Premier Motor Co. (Pierce-Arrow),