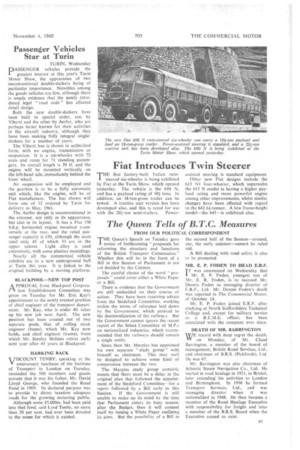 PASSENGER vehicles provide the greatest interest at this year's Turin Motor Show, the appearance of two unconventional double-deckers being of particular importance. Novelties among the goods vehicles are few, although there is ample evidence that the newly introduced legal "road code" has affected detail design.

Both the new double-deckers have been built to special order, one by Viberti and the other by Aerfcr, who are perhaps better known for their activities in the aircraft industry, although they have been making fully integral singledeckers for a number of years.

The Viberti bus it shown in unfinished form, with no engine, transmission or suspension. It is a six-wheeler with 72• seats and room for 71 standing passengers. Its overall length is 39 ft. and the engine will be mounted vertically on the left-hand side, immediately behind the front wheel.

Air suspension will be employed and the gearbox is to be a fully automatic unit which, like the engine, will be of Fiat manufacture. The bus shown will form one of 12 ordered by Turin for delivery in May, 1961.

The Aerfer design is unconventional in the extreme, not only in its appearance, but also in its layout. It has a Fiat 150 b.h.p. horizontal engine mounted transversely at the rear, and the rated passenger capacity is 150, although the seats total only 45 of which 33 are in the upper saloon. Light alloy is used extensively, with some plastics mouldings.

Nearly all the commercial vehicle exhibits are in a new underground hall at Turin this year. It is linked to the original building by a moving platform.